Tennents Vital in crisis as Calvin Harris splits up 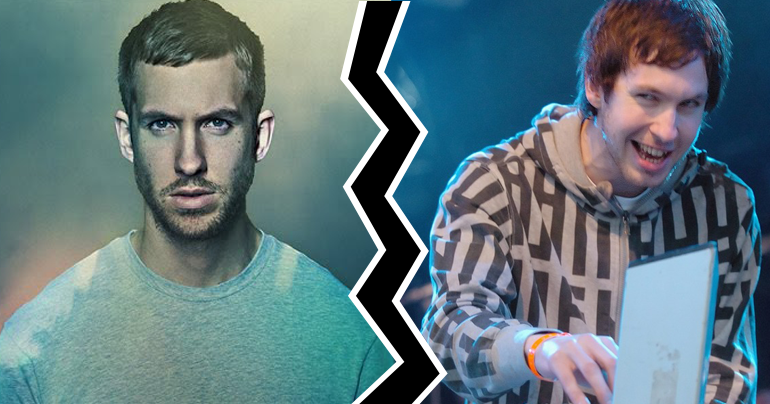 Fans of dance music duo Calvin Harris are said to be ‘gutted’ today after news broke that the Scottish DJs would not be taking part in tonight Tennent’s Vital gig because they are splitting up.

Calvin and Harris first met in 2006, going on to record a string of worldwide dance hits together. However animosity has grown between the pair because Calvin, the handsome one, gets to perform on stage and take all the credit, whilst Harris, the talented one, is stuck is backstage doing all the work. Calvin has gone onto date a string of hot female pop-stars including Rita Ora and Taylor Swift, whilst single Harris still lives with his mum.

“After seven years of making music together we’ve decided to go our separate ways” revealed Calvin this morning. “There are no hard feelings but Harris wants to stand on his own two feet. Preferably at a DJ box, twisting knobs and stuff like me.”

Harris too remained upbeat. “We’re still mates, but as good looking as he is I’m sick of looking at him, not to mention smelling his hole. They always stick us in a twin hotel room and if he’s not banging some model he’s letting rippers in the middle of the night. Usually both. I haven’t had a decent nights sleep in years.”

Tennents Vital organisers have sourced a replacement for the dance music duo but their solution isn’t impressing ticket holders thus far. “We’ve lined up a Calvin lookalike to stand on stage punching the air at key moments of his greatest hits on CD” said Phil Keg from Tennents “but people are freaking out on Facebook about it. Reckon it wont be authentic enough!”

“We think we’ve got around the problem by putting on a half price bar and giving out free shots. Hopefully by the time he gets on people will be too shit-faced to notice that it’s just some handsome bastard on stage pressing buttons to a backing track!”. Meanwhile local drug dealers have also chimed in with support, promising that their current batch of wingers would ‘blow the kite clean off ye’.

“Trust us, people won’t be able to tell the difference between Calvin Harris and Calvin Klein when we’re done.” said Halfa Henry from NI Council for Recreational Drug Use. “which is ideal, cos most people will be dancing in their underpants by half ten.”