Celeb chefs ready to cook up a storm for Ulster customers 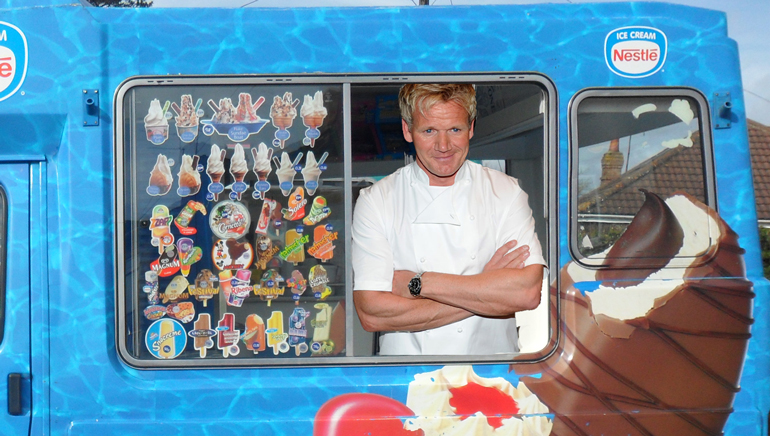 Fans of gourmet food in Northern Ireland are salivating this evening after it emerged that several top chefs are to follow the example of Marco-Pierre White and open restaurants here.

The news that the French Gastropod is to open an eatery in East Belfast’s salubrious Park Avenue Hotel was swiftly followed by an announcement from housewife’s favourite Jamie Oliver – that he is to take over the hot food counter at Jamesie’s Centra at the foot of the Glenshane Pass.

“The name just fits perfectly,” the Naked Chef told us. “We’ll be serving veggie roll, scotch eggs, jambons, the lot. I know it doesn’t fit well with all that healthy school dinners bullshit I used to come out with, but 6 sausage rolls for 2 quid? You couldn’t beat that.”

“It’ll be pukka,” he added, “whatever that means.”

Meanwhile Gordon Ramsay is to trade in his Hell’s Kitchen for an ice cream van with a pitch on the scenic North Antrim Coast. “It’ll be f**king class,” the foul mouthed chef told reporters, “not everyone likes that fancy muck I make, but who doesn’t like a nice poke on a Sunday?

“I’ll mostly be setting up in Portrush through the summer, but during the winter I’ll take a rake round the local schools and sell the kids single fags,” he concluded, before swearing a lot and punching a photographer.

Elsewhere fish enthusiast Rick Stein has followed suit and plans to take over the Donut stand in the carpark of the Derry branch of TK Maxx. “No one eats any of that fish shite I make anyway,” he told us, “and this is a cash business. Do you think the tax man will have a clue how many Donuts I sell? Will he f**k… It’s a license to print money.”

Not everyone has welcomed the news. Local celebrity chefs Paul Rankin and Jenny Bristow held a joint press conference this afternoon at which they told journalists they “would not stand idly by and allow foreign chefs to steal our customers.” “At this stage we plan only peaceful protests,” said Rankin, “though we cannot rule out an armed response.”

“Sprouts will be shat.”