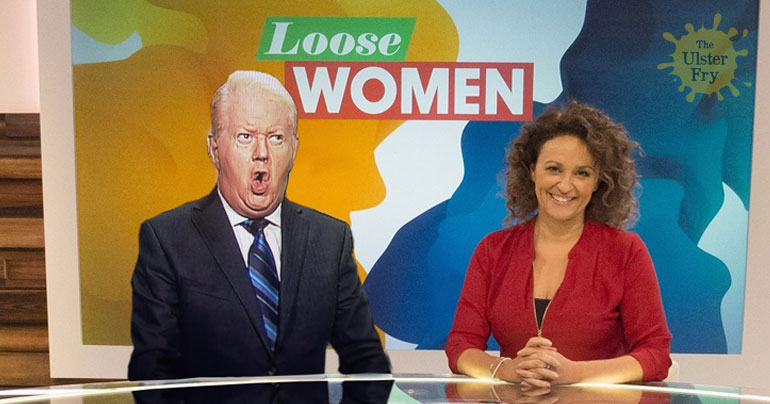 With ITV closing in on the purchase of UTV, it has been revealed that the broadcasting giant’s real objective is securing the services of some of Ulster’s best known television talent.

“Ulster Television has long set the international benchmark for TV presenters with style, sophistication and class” said Charles Dichotomy from ITV. “Whilst we’ve had to make do with Trevor McDonald, Jonathan Ross, Davina McCaul across the water, Northern Ireland has been spoilt for choice with stellar talent like Paul Clark, Ivan Little and Rose Neill. With this acquisition we will finally be able to add real star-power to our station!”

If the deal goes through, it is expected that UTV’s finest will take charge of ITV’s biggest shows. Pamela Ballantine will become the ITV News anchor, Marc Mallett will oust Jeremy Kyle, whilst Julian Simmons will become the new host of Loose Women.

Meanwhile Joe Mahon from ‘Lesser Spotted Ulster’ is expected take over presenting duties on popular dating show, Take Me Out. In a dramatic change of tack for the show however, the party isle of Fernandos will be replaced by Lusty Beg island in Co Fermanagh, where contestants will go for a nice walk and talk to local fishermen about trout stocks in the lake.

Frank Mitchell will continue his role as a weather presenter, however his popular ‘Weather Watch’ format will be spun on it’s head to take advantage of his new strange surroundings.  ITV plan to drop a clueless Mitchell at towns across the UK, whilst viewers taunt him with cryptic pun based clues about where he is. If he can figure out his location and scran the bus money back to London, his contract will be renewed for another 24 hours.

In a ‘swap-deal’ going the other way, Ant and Dec will come to Belfast to film a new talent contest called ‘Britain’s Got Pallets’, in which a panel of judges will score local hoods for their bonfire building skills. In return UTV legend Gerry Kelly will take over Saturday Night Takeaway, however ITV are said to be ‘mildly concerned’ that all his ideas for contestant challenges involve chipping a golf ball into a washing machine with a putter.

Negotiations are now so advanced that ITV producers have already begun work on a Downton Abbey spin off set in Northern Ireland. “The Earl of Grantham has lost his fortune and relocated to Belfast,” says an industry insider.

Filming of the first series of Newtown Abbey begins next spring.