One Direction have “already left the stage,” claims Gerry Adams 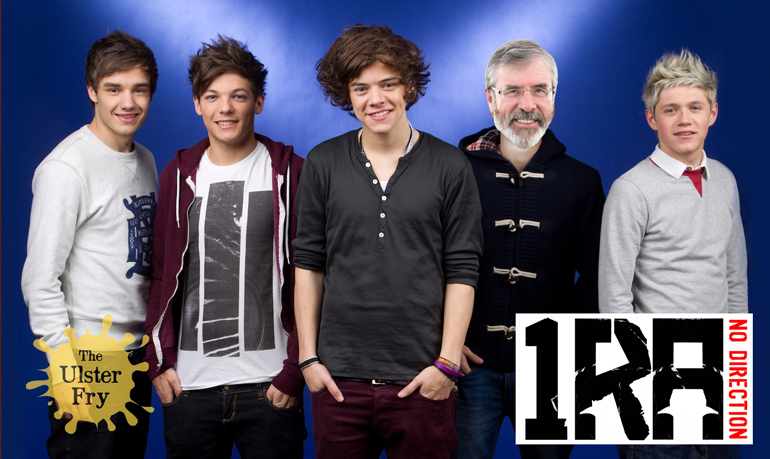 Sinn Fein President Gerry Adams has told reporters that boy band One Direction “no longer exists” and is “is not involved in any musical activity.”

The statement follows the allegations last week that the shadowy group is still fully operational, despite a split in its ranks earlier this year. Senior PSNI officers have said that their intelligence sources indicate that individual members of One Direction may have been involved in some chart action over recent months, but refused to be drawn on whether this was sanctioned by their management.

Speaking at a Girls Aloud commemoration in Cork, Mr Adams claimed that such statements were designed to undermine the Peace Process. “As a band the members of One Direction are all fully committed to delivering peace and lasting musical change on this island,” he told the crowd. “There are many tribute acts out there who may well continue to perform, but 1D have gone away, you know, they’ve left the stage.”

Despite these claims, our security source revealed that there are still concerns that rogue elements within One Direction may be linking up with members of other dissident boy bands. “We know they’re engaged in criminal musical activities,” we were told, “including an assault on the eardrums of people in Tyrone, carried out by an organisation calling itself West of the Bann Life.” The reaction of Loyalist groups such as Union J and East Belfast 17 is also being monitored.

First Minister Peter Robinson has warned that if the allegations are true he would be prepared to bring down the Stormont administration. “This is a very serious matter,” he told us, “if it emerges that members of the group are operating with the full sanction of the Boy Band Council, the DUP will be forced to reconsider its position on the Executive.”

In previous statements Mr Adams has denied ever being a member of One Direction, despite appearing on a number of their early posters and as a background dancer in several of the bands videos.