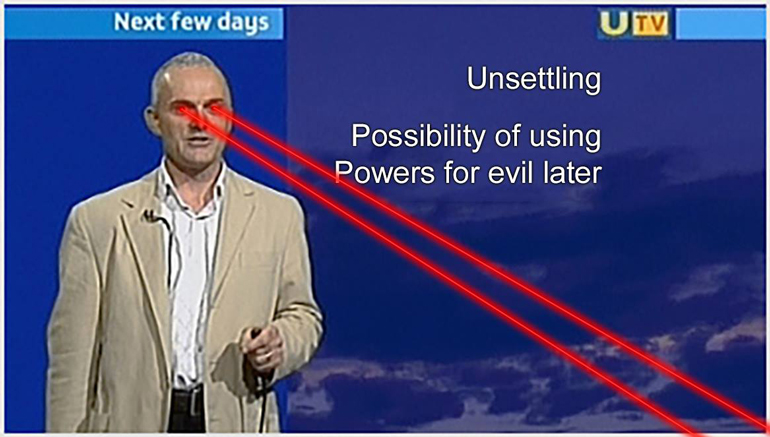 Bosses at BBC Northern Ireland are said to be “quaking in their boots” after their counterparts at UTV revealed that weatherman Frank Mitchell has unexpectedly acquired the laser eyes superpower.

Experts believe that Mitchell, 67, developed the condition as a result of hundreds of bouts of laser eye surgery, a process which he advertises continually through social and mainstream media, along with his colleague Pamela Ballantine. “Frank and Pamela are never off the operating table,” said a UTV insider. “It started off as a simple matter of correcting their vision, but soon they both became addicted.”

“After his 124th operation, Frank suddenly found that he could blast red hot laser beams from his eyes when he accidentally set fire to Paul Clarke’s arse during rehearsals for UTV Live. Pamela’s had an altogether different reaction to the surgery, she’s grown to over 50 feet high.”

Over at the BBC there are concerns that the newly enhanced UTV weather-team will use their powers for evil, and attempt to wrest control of the small screen from their traditional rivals – Barra Best and Cecilia Daly.

“We’re taking steps to address this,” we were told by BBC Head of Genetic Modification, Professor Charles Xavier. “At this very moment Barra is being repeatedly bitten by radioactive spiders, in the vague hope that he’ll be able to stick to walls and fire web stuff from his wrists. We’re not sure what to do with Cecilia, but we’ve dressed her all in leather and given her a rake of cats to look after.”

“In the meantime we’ve sprayed Nolan green and have him wandering around Ormeau Avenue in a pair of ripped shorts,” he concluded, “hopefully that’ll fool the UTV supervillains, but really it’s a normal day for Stephen.”