Northern Ireland determined to make qualification as difficult as possible 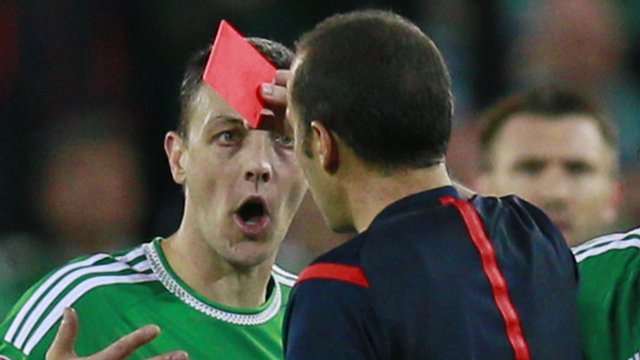 After another heart-stopping evening’s football at Windsor Park, it has become clear that the Northern Ireland football team are determined to take qualification for Euro 2016 right to the wire.

A hard fought draw against Hungary last night leaves them top of their group with two to play, but both of these matches are potential banana skins – a fact not lost on manager Michael O’Neill. “We put in a good first half,” said O’Neill, “and were beginning to look dangerously close to qualifying, so I told our keeper to drop the ball and let them get a wee lead for a bit – just to liven things up.”

Soon after, Chris Baird contrived to get himself sent off in dubious circumstances. “That was good work by Baird,” his manager told us, “getting himself booked twice for the same thing. It meant they had a lead AND an extra man, which is kinda how we like it.”

It was only in injury time that Northern Ireland decided to go up a gear, and struck back through talismanic striker Kyle Lafferty. “I suddenly thought – ‘shit, there’s only a couple of minutes to go here’,” revealed Lafferty, “so I said to the lads that I’d knock a goal in to settle the nerves a bit.” Cleverly, the Norwich forward had earlier managed to get himself booked, thus ensuring suspension for the next match. “Best not to have your top goal scorer in the side for a match like that,” claims O’Neill, “it’d make things too predictable.”

The fans, meanwhile, are delighted with the twists and turns of the qualification process. “Basically we like to spend the entire campaign shitting ourselves,” we were told by supporter’s spokesman Gary Armstrong, “it was all starting to look too comfortable.”

Next up is a home match against Greece in October – a match O’Neill is determined will be as tight as possible. “Greece aren’t in great form,” he explained, “so I’ll probably tell a couple of the lads to get themselves sent off and then replace the keeper with one of the ball-boys.”

“We’ll nick another draw with a goal in the 31st minute of injury time, probably scored by a linesman, then it all be set up for a nice nervy trip to Finland.”