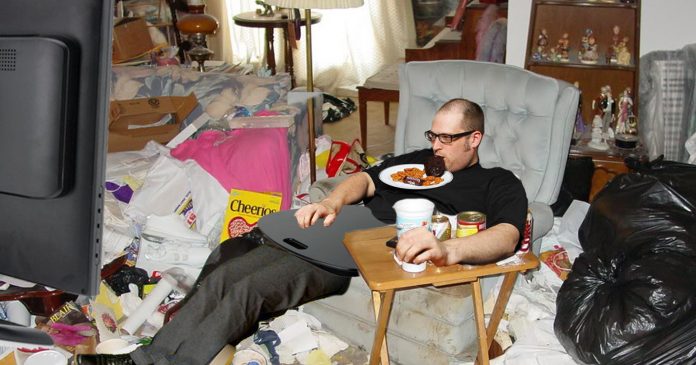 38-year-old Larne man Dixon Parks has spent the last half hour of his day off running about the house like an eejit, setting elaborate decoys to let his wife think he’s done the housework.

The civil servant, currently on a day’s flexi-leave, told us “Every time I get a day off to myself she leaves me a list of chores the length of your arm – ironing, washing, hoovering, polishing.  You name it, she has it on the list.  How does she expect me to get everything done AND still have time to catch up on Game of Thrones, play some Xbox or just scratch my arse on the couch?”

“To be honest, I always leave everything until the last half hour before she gets in,” he told us.  “I’m a master in the art of distraction.  Think Kevin McCallister from Home Alone, only hairier.”

“I tend to start with a quick spray of Fabreeze around the place to put her off the scent, so to speak.  As for the hoovering, as long as you leave the hoover sitting in the hall for her to trip over when she comes in, she’ll think you’ve done a great job.  Same with the polishing.  Spray a bit of pledge on a cloth and leave it beside the TV.  Job done.”

“The ironing, well, it’s a trickier proposition.  Some men out there take the old school approach and just dump it in the wardrobe.  That’s a bit risky in my opinion and could undo all the good work you’ve done in the past 30 minutes.  I normally take a hit on this one and iron one or two items as she’s coming down the drive-way.

“As soon as she gets in the door, run past her and say you’re gonna treat her to a Chinese.  She’ll be that pleased about it she’ll do the it all herself while you’re out.”