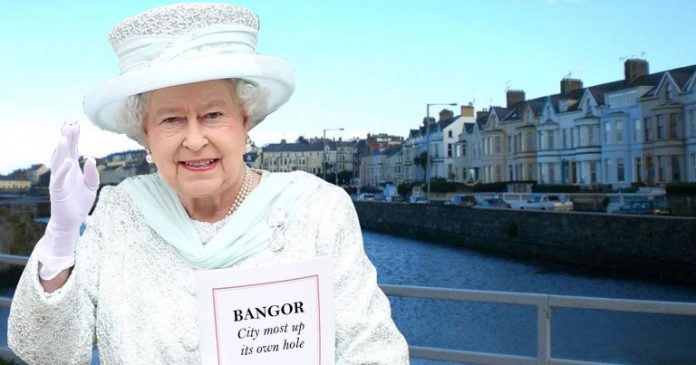 There was dancing in the streets of Bangor this morning after the Queen declared that it was the first city up its own hole in Northern Ireland.*

The move comes as part of the Platinum Jubilee celebrations, which will also see the towns of Larne, Lurgan and Strabane officially upgraded from “holes” to “dumps”.

Speaking exclusively to The Ulster Fry, Her Majesty revealed that she’d thought long and hard about which NI town should receive the coveted title.

“One got a map out and realised there were no other big towns left in Northern Ireland that one hadn’t already decided could be cities,” she explained.

“Fair enough, there’s sod all in Bangor, but one did Lisburn and Newry a while ago, which was a bit of a laugh to be honest, as they’re as close to being cities as one is to being Pope. Where else could one do? Coleraine??? No chance – Coleraine is a shithole.”

“One did think about doing Ballyhalbert, because we’ve a caravan there, but Prince Charles said that’d be favouritism and would make Ballywalter people jealous.”

A spokesman for North Down and Ards Council said the move will bring great benefits to the area. “As a result of this development, Bangor is now in prime position to host the 2038 Olympics. We also plan to build the world’s tallest building, and replace the wee train in the Pickie Park with one of those high speed yokes they have in Japan.”

*Correction: We have been asked by the people of Derry to point out that their city has been up its own hole for ages.