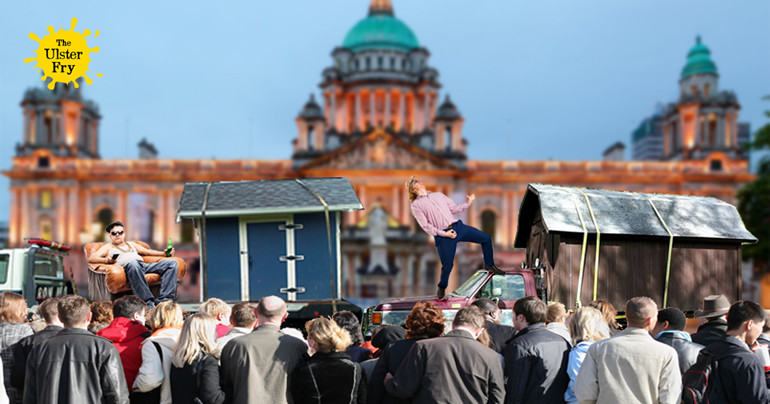 After more than 20 years of complaining that there’s no Straight Pride event to mirror Gay Pride, Belfast’s homophobic community have finally got grant funding to hold their own parade.

As our poorly photoshopped image shows, the event will celebrate the very best of stereotypical straight male pursuits. The eager crowd will be able to enjoy an exciting parade with floats carrying things like garden sheds, angry dads drinking beer, air guitar displays and fishing.

According to retired Free Presbyterian Minister the Rev David McIlspleen, religious fundamentalists will have their own special role in the parade. “We’re working on a float showcasing our finest street preachers, who’ll alternately rant loudly then sing badly using utterly inadequate sound systems, whilst colleagues hand out little tracts for people to drop in the street.”

Unsurprisingly the Gay community is up in arms about the news.

“I’m not heterophobic and some of my best friends are straight, but this is a step too far,” said Gay Rights Worker Sebastian Muller. “There’s more than enough heterosexual things in the media, and to be frank we’re fed up with having this kind of stuff rammed down our throats 365 days a year.”

“We’ll be out in force at the City Hall gates to protest,” he continued, “Mainly by looking fabulous.”