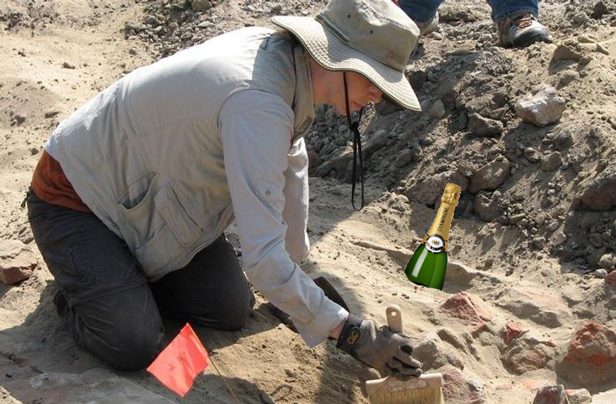 The 1000 year old skeleton unearthed in the grounds of Hillsborough Castle was wearing corduroy trousers and was buried in a Barbour lined coffin, The Ulster Fry has learned.

According to archaeologist in charge of the dig, people in ancient times were often buried with items that were significant to their lives. “We can learn so much from these grave goods,” says Professor Walter Dolmen, “and ‘Hillborough Man’ was surrounded by some very exciting finds.”

“Look at the craftsmanship on this ancient polo mallet, and the design of these keys show that he must have owned some kind of primitive Range Rover. We can only imagine the kinds of journeys he made in such a vehicle, probably leaving the boys to school at Inst and taking little Hermione to her horse riding lessons.”

These finds contrast with those found at similar sites across Northern Ireland. “If we’re excavating in Tyrone, for example, we’d expect to find the remains of baler twine tied round the waist of the skeleton,” explains the archaeologist. “We might also find that the skull had an enlarged jaw, evidence that people couldn’t understand a word he said – resulting in attempts to talk louder.”

Inevitably burial grounds in the Lurgan area contain primitive wine bottles, whilst Bronze Age Chieftains in County Antrim were often found interred with several sheep, “in case there were none in the next world.” West Belfast graves are rarely excavated due to the ancient custom of burying local men with an explosives cache.

Graves in Derry are the only exception. “Generally we find nothing in the North-West,” says Professor Dolmen.”Probably because, even then, themuns in Belfast got everything.”