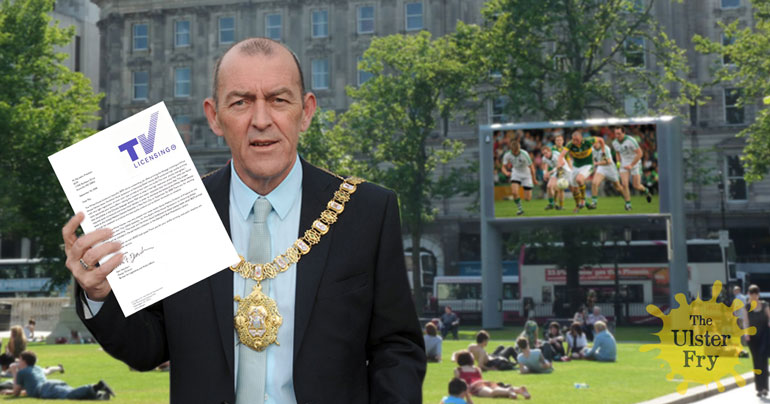 Sinn Fein Lord Mayor of Belfast, Harder Arson, has sensationally appeared before local magistrates this morning – charged with not paying the TV licence for the big screen outside City Hall.

“He just told me straight to my face they didn’t have a TV then slammed the door,” licencing collector John Baird told the court this morning. “Talk about a brass neck! It’s 50ft high and sitting out in his garden FFS!”

Baird went on to tell the jury how, over the course of the next few days, Mr Arson concocted a string of ‘lame excuses’ in an effort to avoid paying. “First he told me it had no aerial and they only used it for watching DVDs, but I wasn’t buying that!”

“The next day he told me it was just a digital photo frame for looking at his holiday snaps. Right enough, when I looked up and there was a big slideshow of him in Benidorm with his missus, wearing a set of budgie smugglers. I was traumatised, but vowed to return!”

“When I called back, he said the TV had been taken away, and I believed him ‘cos it seemed to have gone. However when I got up close, I realised he’d simply uploaded a photo of the Apartment Bar so it blended into the background. It was like something outta Mission Impossible!”

After weeks of playing cat and mouse Mr Arson was eventually caught out. “I knocked at his door one sunny day and asked him to explain why there were hundreds of goths lying on his front lawn watching the Wimbledon tennis final on BBC One.”

The Mayor is officially the first member of Sinn Fein to pay their TV licence – a move since heralded as a ‘brave step towards peace’ by Martin McGuinness. However the party was quick to reassure its mandate that by paying the licence they were in no way recognising the right of the BBC to show TV programmes on Irish soil, apart from Eastenders, Homes Under the Hammer and “anything with Ainsley Harriott.”