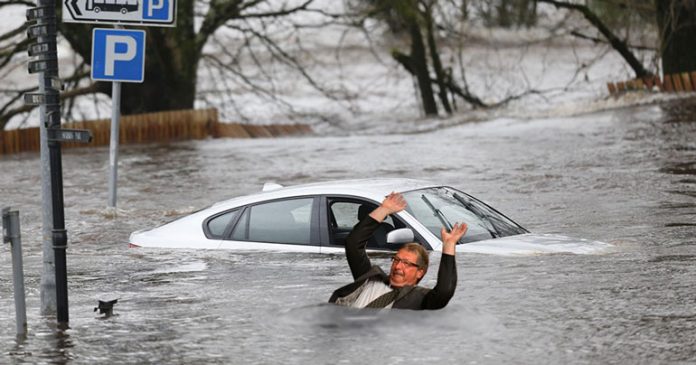 Prominent DUP MP Sammy Wilson and his views on climate change have been completely washed away in last night’s flooding, a party spokesman has admitted.

The Ulster Fry understands that the East Antrim representative’s flood defences were finally breached by a torrent of water at 9pm last night, with satellite images showing him floating northwards off the coast of Scotland.

“Sammy has traditionally relied on making stuff up as his defence in the Climate Change debate,” we were told by the DUP insider. “Sadly we’ll now have to admit that his arguments don’t hold water.”

Mr Wilson’s party colleague Edwin Poots, meanwhile, has claimed that his views on the formation of the earth have survived last night’s deluge intact.

“I fully expect to see a new Giant’s Causeway formed by this Great Flood,” he told reporters, at a press conference held aboard an Ark in his garden.

The North-West has been particularly badly hit by last night’s flooding, causing long delays on roads in the Derry and Tyrone areas.

“It’ll take hours for our services to get anywhere,” said Translink spokesman Tim Table, “so no change there then.”