Emoji lessons to replace language courses at University of Ulster 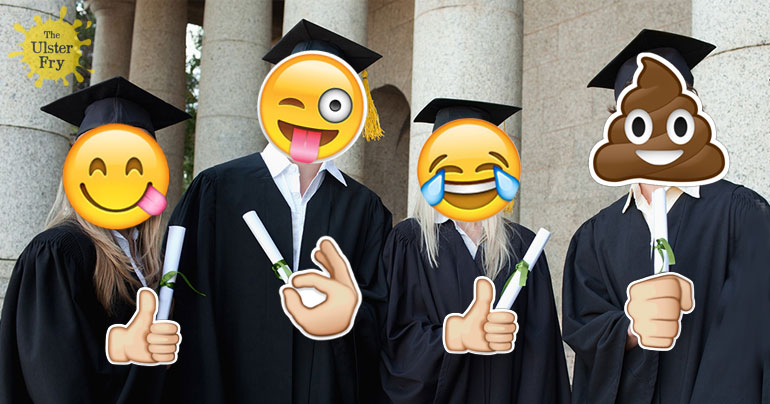 An investigation by the Ulster Fry has discovered that the proposed closure of the University of Ulster’s modern languages department is due to a plan to begin teaching the complex symbolism of emoticons and ‘Emojis’.

According to our source, the controversial move is designed to bring the university into the 21st Century. “We must adapt to the changing educational needs of the global economy,” says Professor Brian English, Head of Made Up Languages at the Coleraine Campus. “We must accept that no one needs French or German in a world where human communication is primarily conducted through colourful cartoon icons.”

For the uninitiated, the language of Emoji uses of lots of little symbols to communicate on the internet – such as smiley faces, crying monkeys, slices of cake and cocktail glasses. “We must prepare our young people for the real world,” says Professor English. “We can’t really expect one of our graduates to conduct business in Japan if they can’t understand the sentence ‘sad face smiley, horse, horse, high heeled shoe, beer glass, tongue out smiley’ – can we?”

The move will cause concern among many parents, who are now increasingly unable to converse with their teenage offspring using text based communication – and will fear the next step will be teaching Emoji in schools. “I haven’t a clue what my daughter Sultana is on about most of the time,” we were told by 41 year old father of two, Geoffrey French. “I texted her the other day to ask what time she’d be home for tea and she replied ‘alien face, car, barbershop pole, crying smiley, pig face, pig face.’ What the f**k is all that about?”

No one in the assembly really cares about the closure of the university department. “We have to make cuts somewhere,” said a Department of Employment and Learning spokesman. “Anyway most foreign types speak English these days, so why bother your hole learning those mad languages they speak?”

“Can you make sure and add ‘An Roinn Fostaiochta agus Foghlanna’ and ‘Depairtment for Employ an Learnin’ when you mention my department?” he concluded. “It’s important to keep the MLAs happy.”