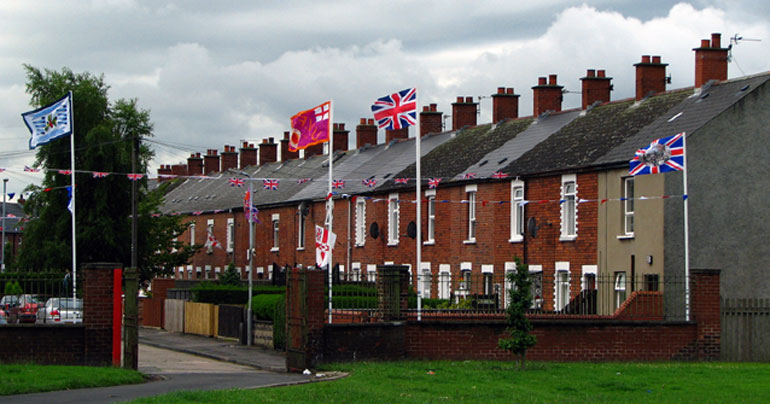 There is growing concern among community representatives in East Belfast after a local man added a second flag to his home, and immediately declared himself “100% more loyal” than his single flagged neighbour.

The incident, which occurred in Aughrim Street, launched a run of tit-for-tat flag related activities, which the PSNI fear may spiral out of control. Aughrim St resident Walter Bunting takes up the story.

“It began this morning when Big Geordie at number 47 stuck an Ulster Flag up alongside his Union Jack,” he told us. “It looks well, to be fair, one under each window at the front of his house, but he started hanging over the fence telling folk that he was twice as loyal as the rest of us.”

The move brought an immediate reaction from Wee Geordie at number 45, who erected three 20 foot flag poles in his front garden, adding a Scotland flag to outdo his larger namesake.

“Wee Geordie’s flags were fancy ones too, with tassels round the edges,” says Bunting. “He even got a bugle and played it as he hoisted them.”

The escalating tensions rose further when Average Geordie at number 44 got together with his neighbours, named locally as Dave and Davey, and they added 52 flag holders to the front of their properties.

“He’s been on the internet and they’ve ordered the flags of all the Commonwealth Countries, special delivery,” explains Bunting. “And he’s spelled out the words ‘No Surrender’ across his house with them wee flags they have in the navy.”

At time of going to press there is a heavy police presence in the area, although UN sponsored talks have got under way in the hope of brokering a cease-flag.