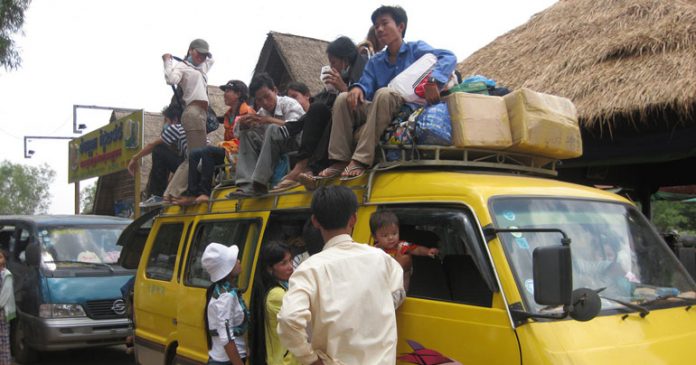 Billed as a transport revolution for Belfast, the new Glider buses have been in operation since Monday. Our transport correspondent, Rhonda Bout, describes her journey.

“On arrival of at the bus-stop I was delighted to see that there were several Translink staff in attendance ready with helpful advice. These fine gentlemen were able to tell eager passengers that there should have been one along a minute ago, but there’ll be two in five minutes.

Ten minutes later a different one arrived but neglected to stop, followed by an “out of service” vehicle. By this stage the waiting passengers were getting over-excited, so we all celebrated wildly at the arrival of an east bound G1.

As its doors opened, I got my first glimpse of the high-concept “multi-queue” system in operation. This allows travellers to wait patiently in something similar to a normal queue then, as the Glider arrives, three doors open and everyone piles on and beats other passengers to death in an attempt to get a seat.

These are at a premium, as it appears that top scientists have spent years designing the “invisi-seat”, a kind of special see-through seating system which gives the illusion of lots of passengers standing, for ages.

Having successfully jammed myself on top of a reasonably comfortable pensioner, I was then able to spend my journey being buffeted by those left standing. Luckily the Gliders have excellent WiFi, so I could stare at my phone to distract myself from the massive arse which occasionally ground into my face when the bus was forced to a halt by some inconsiderate traffic lights.

A journey to the Dundonald park-and-ride used to take about 35 minutes, before the roadworks designed to accommodate the Glider brought East Belfast to a stand-still. The Glider takes considerably longer despite the new card system which means no-one pays with cash as they get on the bus.

Presumably the designers failed to note that it takes people ages to get off it through the hordes of standing travellers, and the same for those attempting to get on. Why this card system couldn’t have been introduced for normal double deckers, which have fancy things like seats, is quite beyond me, but I’m sure there’s a rational explanation involving a shite excuse.

Having eventually got my car out of the park-and-ride, I was able to get home, three-quarters of an hour after my usual arrival time.

All in all, a thrilling experience which finally firmly places Belfast at the top table of shit places to travel in. Well done to all concerned.”