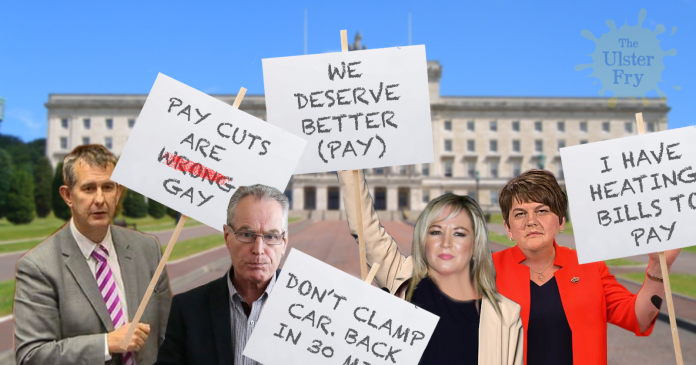 Angry MLAs have vowed to take industrial action after the Secretary of State announced that their salaries will be slashed to a meagre £36k per year.

“This is scandalous,” argued one Lagan Valley DUP MLA, who asked not to be named. “I have no life and two ears to support, how am I meant to get by on this pittance?”

“One out, all out,” said a furious Sinn Fein representative. “If they think I’m getting out of my bed every morning and not going into work for this, they’ve another thing coming.”

“I have bills to pay – Netflix, Amazon, Sky – it’s not cheap lying around on your hole doing nothing.”

As yet, no one is sure what form the industrial action will take, with some MLAs favouring a ”don’t work to rule” while others are planning a “sit-out” at Stormont buildings.

“We’re ruling nothing out,” said Bumper Carr from the MLA trade union – the Amalgamation of Representatives at the Stormont Executive (ARSE).

“We’re even considering flying pickets – IPJ has offered to do the job if someone from Sri Lanka will pay for it.”

“I’ve no doubt that the public will back our membership on this,” he concluded. “Put it this way, if there was an election tomorrow you’d all vote the same way!”