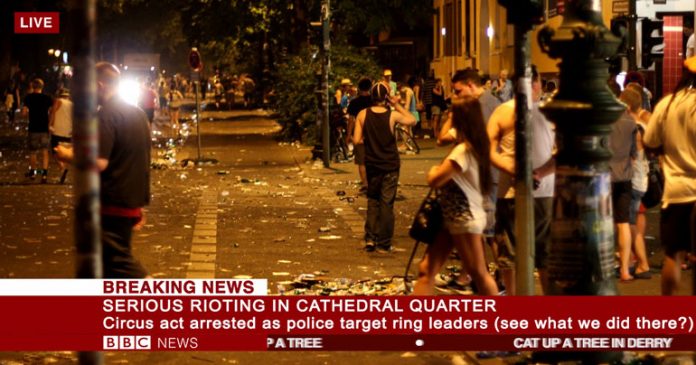 The Ulster Fry understands that trouble broke out after a group of parents from Stranmillis seized control of the instruments in a family drum circle, forcing their counterparts from Upper Malone to explain to their children that they’d have to wait their turn.

“That turn never came,” explained disgruntled Malone resident Penny Hill, as she ripped up cobbles to throw at her rivals. “These Stranmillis ones act like they own the place, but it’s our Culture Night as well, and if they think I’m going to stand behind them in the queue at the Falafel cart, they’ve got another thing coming.”

The violence soon spread to engulf much of the Cathedral Quarter, with one gang of Stranmillis parents hijacking an artisan food stall and setting fire to it outside the John Hewitt Bar.

“I love the smell of gluten free rye bread in the evening,” said Balmoral mum of two, Roberta Duvall. “Smells like victory, and toast.”

“But isn’t it great to see the children so involved in real Belfast culture?” she continued. “I’ve even had Jacinta and Edmund’s faces painted with little balaclavas. They’ll have sooo much to talk about in school on Monday.”

“You couldn’t make this shit up, could you?” said Chief Inspector Keith N Spector , before warning the two factions to disperse or police would deploy the sparkling mineral water cannon.