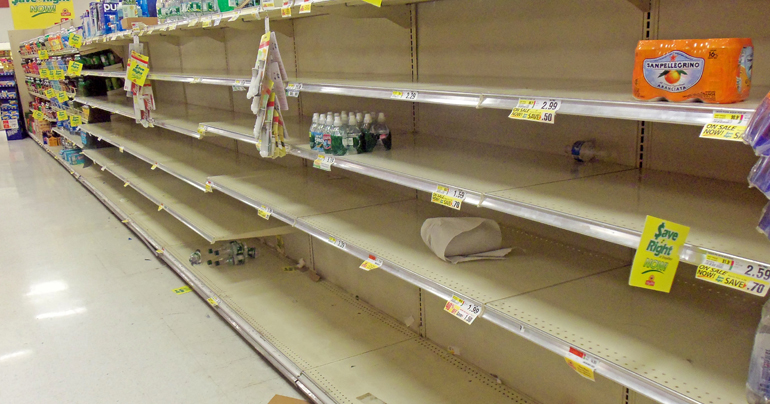 The Worldwide Federation of Giant Supermarkets has warned the public that a nuclear war is likely to come soon after Christmas.

“Things in North Korea are beginning to hot up so it is likely that we’ll be seeing a massive global conflict by the New Year” claimed a spokesman. “Therefore it’s important that people go out and panic buy every single thing they see in our stores as if they may never open again.”

The Federation has produced guidelines on which products will be most important in the impending nuclear winter. “Twiglets, Tunnock’s Teacakes, jumbo peanuts and miniature sausage rolls will be vital to survival. Cocktail sausages will be a new form of currency, so best to stock up.”

Fortunately the news appears to have reached seasonal shoppers. We visited the big Tesco at Knocknagoney this afternoon, and were pleased to see that everyone was heeding the Federation’s advice by emptying the supermarket’s shelves. “I’ve bought an entire trolley full of party food,” we were told by housewife Minnie Pizza, “hopefully I’ll be able to trade vol-au-vents and mozzarella sticks for fuel in the post-apocalyptic wasteland.”

Bangor shopper Brian Cranberry-Parcel had opted to prepare for the end of the world by filling his trolley with beer. “Three cases for 24 quid, sure you couldn’t beat that,” he smiled. “Now when the balloon goes up on Boxing Day I’ll be too blocked to notice.”

However the Electrical Retailers Consortium has urged everyone to remain calm. “Everyone remain calm,” pleaded consortium chairman Dixon Curry, “Any conflict is likely to come after the January sales, so keep some money to buy our old stock of second rate televisions at slightly reduced prices. At least then you’ll be able to watch the apocalypse with surround sound.”