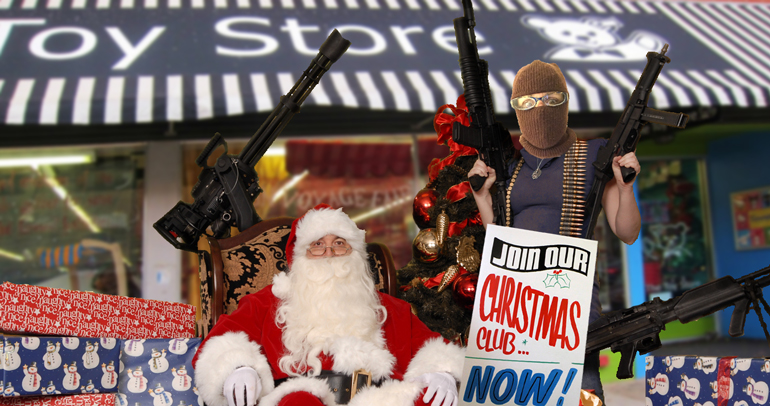 An exhaustive investigation by The Ulster Fry Insight Team has uncovered convincing evidence that “High Street” Christmas Clubs are secretly recruiting members for terrorist groups across the globe.

The clubs, supposedly designed to allow families to save for Christmas, have been established in shops across the country as fronts for groups including ISIS, Boko Haram and Al-Qaeda.

“I joined one in my local butchers,” Mrs Bauble Watson from Dundonald told us. “I’d been hoping to put away some money to help cover my meat bill this Christmas, but three weeks later I was in an Al-Qaeda training camp in Pakistan.”

“I can now strip and reassemble an AK-47 in the dark, but have no idea if I’ve saved enough to pay for a turkey.”

Likewise, 28-year-old hairdresser Tinsel McCafferty thought she’d be spreading the cost of the big day. “I signed up for the one at the Smyth’s at Bloomfield to help pay for the kid’s toys. Little Kanye is mad into Paw Patrol and that stuff is wild dear,” she revealed. “Now I’m a Brigadier in the Philippines New People’s Army, responsible for an entire network in Jakarta. It’s a real pain in the hole.”

Security experts have long warned that the shadowy clubs may have sinister undertones, but only now have the information needed to make arrests.

“Aye, we lifted 14 members of the Toymaster Christmas Club in Banbridge in dawn raids this morning,” said Sergeant Dawn Raid of the PSNI’s Anti-Terrorism unit. “Turns out they weren’t just putting a wee bit aside for Lego, they were also plotting a Communist takeover in Nairobi.”

We contacted Kenyan President Uhuru Kenyatta for comment, but unfortunately he’d already been overthrown by the customers of Big Phil’s Butchers in Magherafelt.