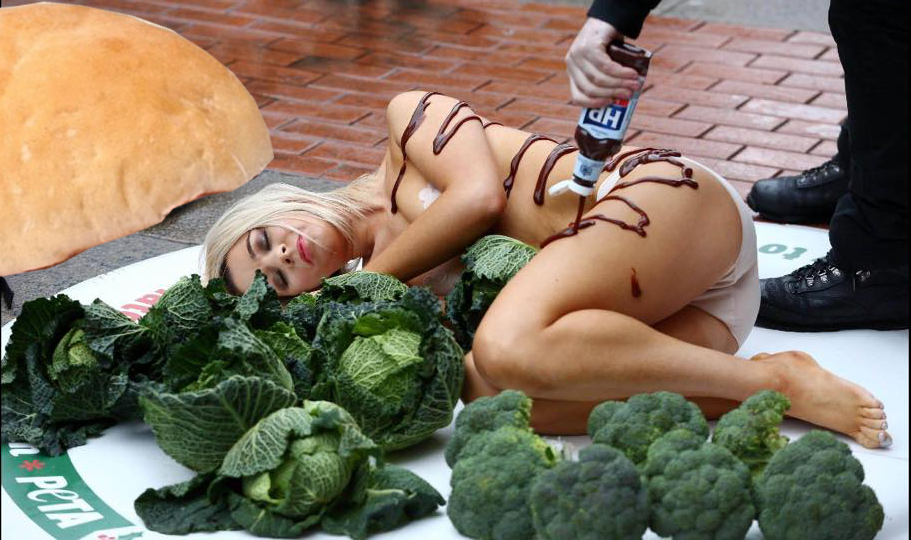 Following sensational scenes at Castlecourt today in which a naked woman was smothered in HP sauce, the shopping centre have denied rumours that she’ll soon be available in a bap.

“Our protest was supposed to put people off meat!” said a disgruntled Sonya Vanilla-Latte from PETA. “So whilst the lady herself was indeed lovely, we want to dispel these rumours that she’s about to get even lovelier by cavorting as a Norn Iron deli-counter favourite!”

“We’re not getting the baps out tomorrow!” she declared.

The news has been met with disappointment from meat-eating locals, many of whom feel the practice of ‘bap-tism’ unites all people in Northern Ireland under a single culinary belief.

“Don’t get me wrong, meat on it’s own is grand” said Philip Mignon, a protestant from Newtownards who often eats food. “but it’s hard to whack when ye stick it inside a bap!”

This was a view shared by his catholic friend, Chris P Bacon. “Let’s face it, a few sausages on a plate aren’t that exciting. But when you stick em into two bitsa bread…. now yer chattin’!

“Well not really” he added. “cos your too busy stuffing it into your gub!”

The PETA protest has also drawn a negative reaction from meat-loving niche dissident groups, including Republican Action Against Greens and The Ulster Vegan-Free Force.  In a rare show of unity they issued a joint statement this evening warning that the men portraying vegetables in today’s Castlecourt performance had 24 hours to leave the country.

“Sprouts will be shat” confirmed a spokesman.