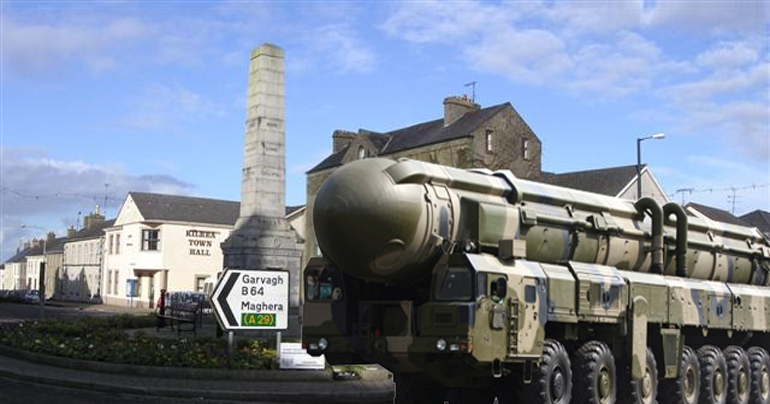 The ruling council of North Kilrea has raised the region’s security status to ‘Def-Con-Wan hi’ amid fears that US President Donald Trump may be preparing for military action in the area.

“We’re taking the threat very seriously ,” the President of the local Sheepdog Society, Jim-Young-Wan told us, “The citizens of the Democratic People’s Republic of North Kilrea will not be intimidated by the sabre rattling of the yankee devils.”

The rise in tension comes after local farmers carried out tests on what security experts described as “intercontinental ballistic slurry tankers capable of delivering huge payloads of shite over several fields.” A further test followed a display of vintage tractors yesterday afternoon, but this one exploded prematurely, showering observers in pig dung.

The use of the powerful agricultural equipment has caused concern in South Kilrea, which has been backed by the USA in the long running dispute with its communist neighbour. A message of support from President Trump was delivered to South Kilrean leader Sean-Joe Mahon this morning, although it understood that the Post Office is closed so he hasn’t got it yet.

“We are prepared to act, and have sent a very powerful fleet to the area. Very powerful, we have the most powerful fleet in the world. USA, USA.” Mr Trump told journalists, “It would be good if the Chinese would help, but if they won’t, we will act alone.”

It is believed that Mr Trump was referring to the Golden Panda Chinese takeaway in Coleraine, which has traditionally supported North Kilrea by delivering battered chicken balls and curry chips to the area.

In a related and equally tenuous story the Marble Arch Caves complex has been closed after the US Airforce dropped the Mother of All Bombs on it yesterday morning. No one from the County Fermanagh branch of Islamic State is available for comment.