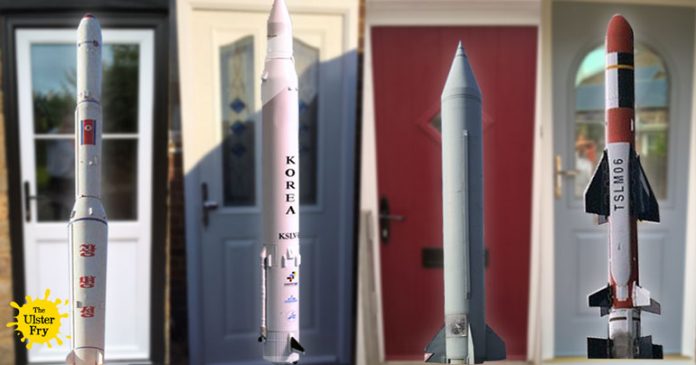 North Korean supremo Kim Jong-un has joined in with National Take a Photo of Your Child at the Front Door Day by posting photos of his favourite missiles standing outside their launch sites.

In an exclusive interview with The Ulster Fry, the normally secretive leader explained that he just wanted to show a softer side to the world.

“These little weapons of mass destruction are very much like children to me, so they are,” he told us. “And sure everyone wants to show off their weans at this time of year.”

“Look at little H11-K2 standing there, hasn’t he grown over the summer? Last year he was barely able to ride a bike now he can fly over Japan, all by himself without stabilisers or nathin.”

The move has caused a rise in tensions in the region, with US President Donald Trump immediately tweeting a photo of a Cruise Missile standing at the door of the White House.

There is also concern in China, where officials have privately admitted that the ‘one missile per family’ policy introduced in the 1980s may well prove to be a mistake.

“We never expected such an escalation in front-door diplomacy,” said a Beijing insider.

The rest of the world is looking on in bewilderment. “This all just got weird,”  UN Secretary-General António Guterres told us. “Although maybe it’s no weirder than the rest of the shite that goes on round here.

“Beats them all posting photos of their dicks on Facebook, I suppose.”