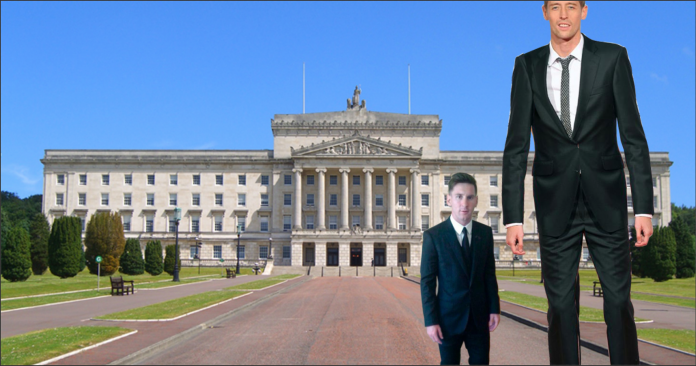 The stalemate in Northern Irish politics could sensationally be broken by midnight tonight, after an audacious plan emerged to recruit new MLAs on footballs transfer market.

“Arlene and Michelle have been disastrous for us upfront.” revealed Stormont spokesman, George Worst. “Despite constantly being on the attack they still haven’t produced enough balls to strike up a decent partnership”

Stormont officials are thus frenziedly working on a number of last minute deals to replace their entire squad before the transfer market closes tonight.

“They are perfect for running NI. With such a glaring height difference we are pretty confident that they’ll never see eye-to -eye on anything!”

“We also have bids in for Raheem Sterling and Jesse Lingard” he continued. “With the entire DUP unavailable for selection we need some quality British right-wingers to drum up some balls and make everyone cross.”

Twitter has since gone into meltdown, with rumours and speculation swirling about other possible 11th hour deals.

Injury-prone West Ham forward Andy Carroll is a surprise target for Minister For Communities for his extensive experience of ending a season in March, whilst John Terry has been targeted as a possible Justice Minister due to his world renowned skills for sitting on defence.

However the biggest shock has been Sinn Fein’s Gerry Kelly agreeing to go into nets for Barcelona.

“Whoops, my bad!” confirmed Darkside. “I misread the ad. I thought they asked for someone with ‘considerable experience in Gaol'”