“OK, no one wants to remember 2016”, Facebook finally admits 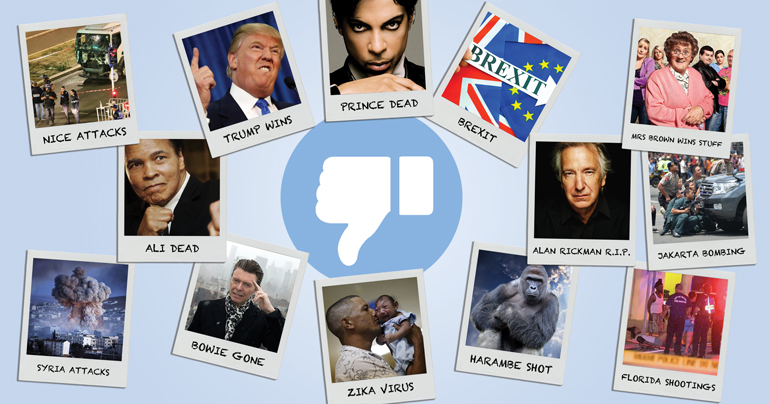 Following the launch of a video generator to remind everyone how great 2016 was, Facebook today admitted that most users are avoiding it because they ‘aren’t clean buck mental’.

“With hindsight this was a terrible idea” admitted Facebook manager, Sharon Lyke. “Between Brexit and Trump, the deaths of Muhammad Ali, Prince and Bowie, terrorist attacks and loads more of our favourite celebs kicking the bucket, it seems people’s best memories from 2016 are actually the ones they re-shared from 2015.”

Accordingly Facebook is abuzz today with people appalled at the notion of celebrating anything about the last 12 months.

“I had a look at my 2016 video earlier and it was a load of dung” said Facebook user, Liz Burn-Rhodes.  “Apparently my best moments of the year were finally getting a taxi home one Saturday night when it was pishing down; a pizza mistakenly getting delivered to my house covered with a topping I can’t even stand; and getting shod of a stinking hangover by making myself boke.”

“Facebook can shove their glossy video up their arse!” she added.

Her neighbour Cormac Street was in full agreement. “I did mine,” he told us, “it was like an episode of the walking dead, only with more dead.”

However not all Facebook users felt the same.  Mr Graeme Reaper, from Hades Avenue, Larne, wrote to us to say that he’d “loved” 2016 and “had great craic altogether”.

“and with Trump in charge, I’m looking forward to a busy New Year.” he added.