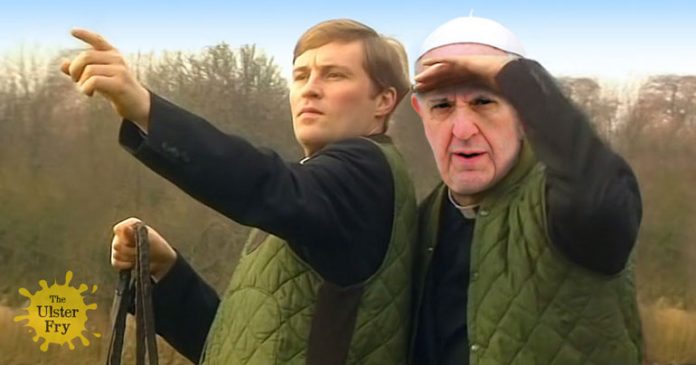 Pope Francis looks set to honour Ireland’s top ‘Golden Cleric’ during his visit to the country this weekend, The Ulster Fry has learned.

It is understood that the Pontiff hopes to make a special pilgrimage to Craggy Island where he intends to upgrade The Holy Stone of Clonrichert to Class One Relic, the holiest of all relics in the Catholic faith.

“His Holiness wishes to pay tribute to Father Ted,” said Italian Cardinal Juan Cornetto. “He recognises the important contribution that Ted and his companions Dougal and Jack made to the work of the church in Ireland, particularly their stand against the blasphemy of the Passion of Saint Tibulus.”

This will be acknowledged in a special blessing, where the traditional response of “Peace be with you”, “And also with you” will be replaced with “Down with this sort of thing,” “Careful now.”

For the faithful, the sight of Pope Francis being joined on stage by Father Dougal, the last surviving member of the ‘Holy Trinity’, is destined to be a moving experience.

“They will sing My Lovely Horse together, in Latin,” says Cornetto. “Mea Equus Amabilia, or something like that anyway.”

The Cardinal has refused to be drawn on rumours that both Fathers Ted and Jack will be elevated to Sainthood during the visit. “It’s too early to say, we’re still trying to assess if being on TV every day for the last 20 years counts as a miracle, as we might have to make Eamonn Holmes a saint as well.”

However he did confirm that there would be a permanent tribute at the Vatican.

“We’re painting over the ceiling of the Sistine Chapel,” he told us, “with a big picture of Ted kicking Bishop Brennan up the arse.”

From our religious correspondent, Helena Hancart.