Bonfires are for arseholes, reveal scientists 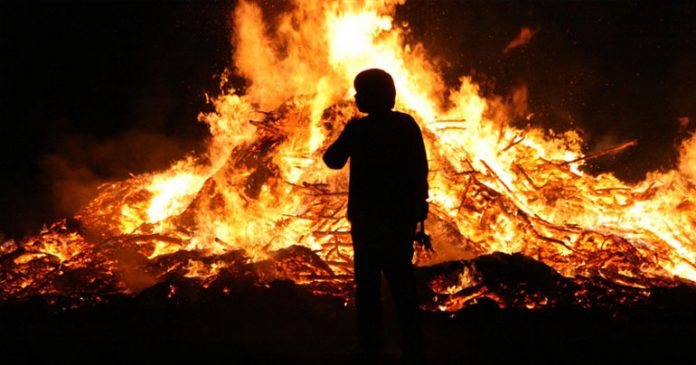 A new study conducted by an international team of scientists has concluded that the annual Northern Irish ritual of setting fire to things is mainly enjoyed by arseholes.

“It’s clear that piling up huge pyres of pallets and bedecking them with the symbols of your neighbours before burning them is not the behaviour of rational thinkers,” said the report’s author, Professor Fu Keen Obvious. “It’s more likely to be arseholes.”

The report follows another evening of embarrassment in Derry, where, not content with spending much of the summer trying to set fire to the Fountain Estate, local youths burned a load of things they’d nicked from it instead.

The usual spiral of whataboutery on Twitter followed, with supporters pointing out that Nationalist symbols were burned in the Fountain and other Loyalist areas in July. “It’s easy to deal with this type of debate,” says the Professor, “if you accept that arseholery is a one of our few cross-community activities.”

Politicians were quick to condemn the bonfire, claiming that it was unrepresentative of the local community.

“No one here wants this, not even the people who lined up to watch it,” said Sinn Fein MLA Barry O’Hara, who hasn’t been at work for nearly two years so has managed to avoid doing anything about the problem.

However local bonfire builder John Vesta defended the display. “I regard it as a form of protest art designed to commemorate the Assumption of the Virgin Mary,” he told us. “Even adding poppy wreaths and the names of murdered members of the security forces, that’s all cultural and stuff.”

We tried to contact the Virgin Mary for comment but she wasn’t in the phone book, however she later appeared in a vision and told us that everyone involved was an arsehole.