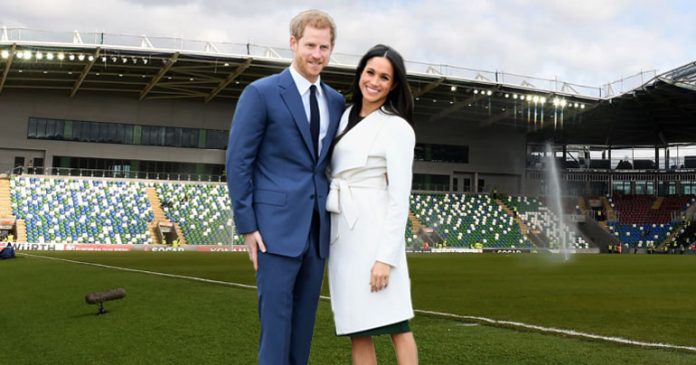 Royal observers are said to be “stunned” today, after Prince Harry and his bride to be Meghan Markle announced that they had moved their wedding from Windsor Castle to Windsor Park.

“It has a better atmosphere, and is closer to the pub,” were the reasons given by Prince Harry for the shock switch. It is understood that the Prince caved in to his fiancée’s demands that their wedding would be held in Belfast after she fell in love with the city during a recent visit.

“It was class craic altogether, so it was,” explained Miss Markle. “I just thought it would be a quare geg to have a rake of Harp under one of the bridges on Tates before heading down to Windsor for the wedding.”

“I always reckon it’s best to have few beers before you get married, then if anything embarrassing happens you’ll never remember it after. Worked for me last time anyway.”

It is understood that the couple intend to invite all Northern Ireland season ticket holders to their big day.

“The block bookers can replace the choir,” explained Harry. “Hopefully they’ll belt out a few renditions of Will Grigg’s on Fire as Meghan walks down the aisle.”

Sadly the plan leaves no seating available for other guests, so it is believed that Harry’s granny, The Queen, will be forced to sit in the wee section traditionally reserved for away fans.

“She won’t mind,” says the Prince. “Chances are she’ll be on on the Gin before she gets here, so you may as well leave her sitting up in Ryan’s Bar”

Since going to press it has emerged that none of this story is true.