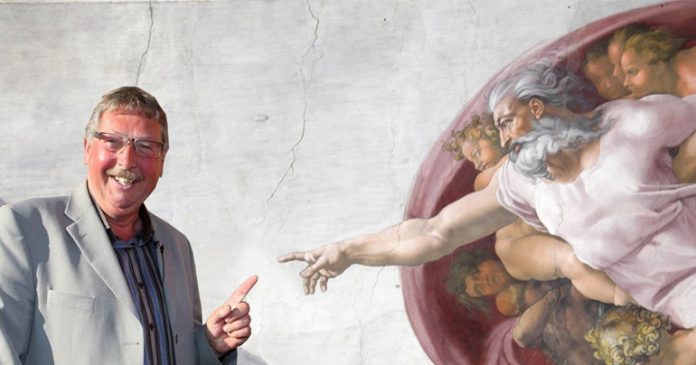 A gathering of religious thinkers has accepted that the existence of Sammy Wilson means that it is ‘highly unlikely’ there is any kind of supreme creator in heaven.

Leaders from all the main world religions attended the meeting, which was held in a large tent near Lisburn. After several days of heated debate they were forced to admit that no rational, intelligent God would ever allow Mr Wilson to be elected as an MP.

“It would seem we’ve been asking the wrong questions for centuries,” said the Archbishop of Canterbury. “We’ve wondered – why does God allow war and suffering? or – why did God create disease?”

“We’ve ignored the biggest question of all – how in the name of all that is holy does an arsehole like that get to be an a position of importance in society?”

The news has also forced an urgent rethink by scientists, who are now reconsidering their theories on the formation of the universe.

“The Big Bang Theory would appear to be out of date,” said Professor Brian Cox, who is the only scientist we know, now that Stephen Hawking is dead.

“We’re working on the ‘Big Arse Theory’ instead. So far we’ve discovered that if you take a standard horse’s arse and a baboon’s big red one and fire them into each other in that Large Hadron Collider yoke, you get something that closely resembles Sammy Wilson when they explode.”

We approached God for comment but a spokesangel told us that he was too busy moving in mysterious ways.