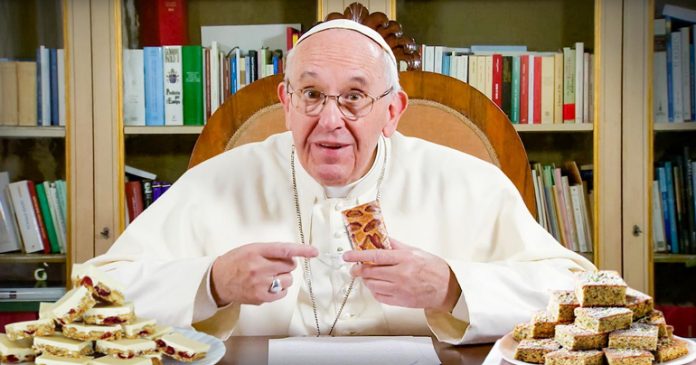 Centuries of religious conflict came to an end last night when Pope Francis made the startling admission that Protestant churches serve a more impressive array of baked goods than their Catholic counterparts.

In an exclusive interview with The Ulster Fry, the pontiff explained that Vatican historians had been studying the works of Martin Luther, and have decided that he may have had a point after all.

“It seems that when he nailed his 95 Theses to that door in Wittenberg, it was actually a list of traybake recipes which would have revolutionised religious catering forever.”

“We could have been eating delicious things like Fifteens, Caramel Squares, Rocky Roads and Flies’ Graveyards – instead we were stuck with the Diet of Worms*.”

Pope Francis now intends to reach out the hand of friendship to Protestant church leaders. “I kinda hope they’ll put a put a Coconut Slice in it,” he confessed.

The revelation has been met with a conciliatory response.

“To be fair, Catholics have better wakes,” said the Queen, who is Head of the Church of England in her spare time. “When my ma died, she lay in state for a lock of days. If we’d been Catholics we could have all been drinking cans of Harp in the kitchen til the funeral.”

Whoever the Moderator of the Presbyterian Church is agreed. “Catholics have far better craic at church,” he said. “All that standing up and sitting down stuff beats sitting on your hole listening to some eejit talking about hell for 2 hours. And they have Bingo.”

As a result of the discussion there is now only one church for everyone to go to, the Queen and Pope have swapped jobs, and a team of Free Presbyterians from County Down will be playing a home fixture against Tyrone at the Edward Carson Gaelic Athletic Club in Anahilt.

*Winner of the most of obscure religious joke competition 1964