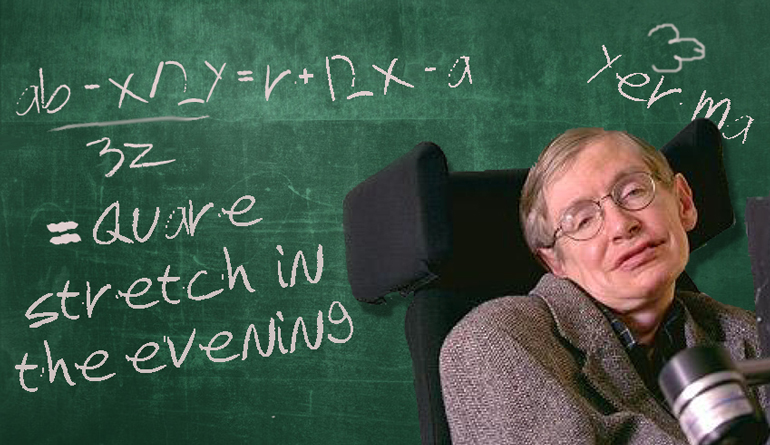 World renowned scientist Sir Stephen Hawking has confirmed that there is indeed a “quare stretch in the evenings”, as of today.

Best known for his role in the movie “The Theory of Everything”, Professor Hawking told fellow scientists that he had been studying the ‘stretch in the evening’ phenomenon for some time, in the hope of finding an exact point when the word ‘quare’ could be added to the statement.

“For so long mankind has been pondering the nature of the universe,” the former Simpsons star told a hushed audience, “struggling to find seasonal small talk about the weather to pass ourselves with work colleagues.”

Continuing in that robot voice he has, Professor Hawking said that he had dedicated his life to the study of quarks “only to realise late in my career that it is ‘quare’ that matters”.

“I can now definitively say that the exact location of the first quare stretch in the evening is 5.33pm on February 18th, in a field just outside Cookstown.”

Fellow scientists the world over have hailed the Professor’s work. “This is revolutionary,” said Harvard University’s Dr Hank Wankelfecker, “He must be a shoo-in for a Nobel Prize for something, maybe even a MOBO award.”

Sir Stephen will publish his latest findings in a new work – “A brief history of shite I left out of that other book” – before beginning a new research project.