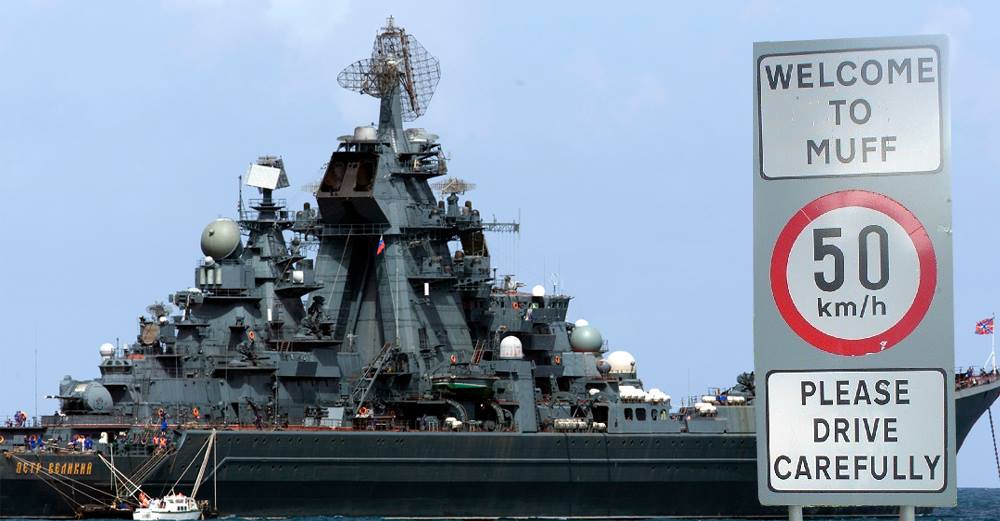 Following NATO intervention to block Russian warships from refuelling in Spain earlier today, The Ulster Fry has learned that the fleet were then diverted to the Derry/Donegal border to fill up at the world famous Top Muff Filling Station.

“Vladimir Putin is a cunning and ruthless operator” said CIA analyst, Zach Crakensachs. “Our intel suggests he ordered his fleet captains to ‘fill em to the throat’ with a locka green diesel, instead of their preferred red variety. And then to make sure they got the change in euros – not sterling”

“Cos it’s not worth pish” he explained.

Whilst Spanish authorities steered clear of the controversy, Muff’s Lord Mayor, Pat McGarden, said the town were ‘delighted’ with the influx of trade and that their guests had been ‘very well behaved’.

“Not only did our Gerard pump over 475,000 litres of diesel today, but we sold about 8,000 pokes and god knows how many jambons and sausage rolls.  Them boys can quare eat hi!”

“Not sure Mickey in the carwash is too happy though.” he added “He had to powerwash 3 battleships for €12.50!”

The US government are understood to be monitoring the situation closely however and have setup a joint-taskforce with local fuel dipping agency VOSA to stop the Russian war effort in it’s tracks.

“Satellite reconnaissance indicates that they’ll have to sail further into the North to get turned, and when they do, ‘BOOM’, we’re gonny dip the hoors!” said Dick Ballbag from VOSA. “We’ll just impound their ships there and then – unless they can pay £500 on the spot!”