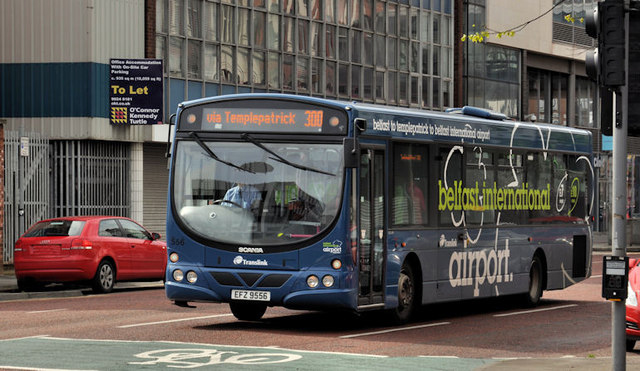 Northern Ireland’s transport links moved proudly into the 1960s today with the approval of plans for a third bus-stop at the world famous Belfast International Airport.

Tourists from across the globe regularly jet into the International Airport from far-flung destinations such as Manchester and Glasgow, but often spend their stay here staring at the County Antrim countryside, believing that they are actually in Belfast itself.

However all this will now change, according to the airport’s Head of Customer Disservice, Ellie Copter. “The new stop will make the airport a transport hub for the Province, allowing weary travellers access to the best attractions we have to offer,” she told us.

“Basically, you’ll be able to simply step off a plane, wait in that cattle barn for your luggage for a bit then chose up three different places to go – most likely Belfast, Derry and Craigavon.”

The proposal is part of a multi-pound expansion plan for the airport which experts feel will finally make it live up to the expectations of a 20th Century traveller.

“There’ll be at least three more bins, an extra cash point, and a new phone box,” Ms. Copter revealed. “We’re also thinking of installing a cattle grid on the runway.”

Not to be outdone, their rivals at George Best City airport have announced the installation of an extra toilet in their departure area, which they say will be specially reinforced to withstand dense and heavy waste.

When quizzed on the peculiar nature of this particular upgrade airport manager Roe Heath told us, “It’s simple really. Most people shit a brick when they see the price of our food.”