Belfast to have “five more quarters” by 2025, say Council 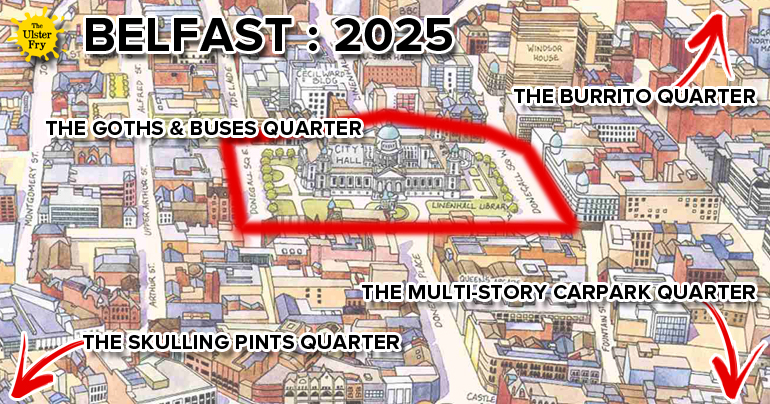 With today’s announcement of a £27m rejuvenation of the area surrounding University of Ulster’s Belfast campus, the city council have revealed an ambitious new plan to further “quarterise” the city into trendy hotspots with hipster-sounding names.

Belfast is famously home to 5 quarters already of course, the nearest and most popular of which will be dramatically impacted by the new plans.

“Aye the Cathedral from ‘The Cathedral Quarter’ is actually inside the new ‘Student Debt Quarter'” explained Dick Jagger from Belfast City Council.  “so we’re gonna have to rename it something else unfortunately”

‘The Pint Skulling Quarter’ is understood to be current favourite, although the ‘The Hipster Quarter’, ‘The Dark & Stormy Quarter’ and ‘The Standing Outside Freezing Your Hole Off Quarter’ are also in contention.

Other plans include rebranding City Hall as ‘The Goths & Buses Quarter’, changing Botanic Ave to ‘The Coffee & Burrito Quarter’ and repurposing the area behind Castlecourt as ‘The Multi Storey Parking, Cheap Wallpaper, Second Hand Records and Tattoo Quarter’.

However one critic has pointed out an obvious flaw with the current geometric naming convention.  “Ye can’t have ten fecking quarters!!” moaned Caleb McHallion from West Belfast “There is a different term for something divided into ten!  So what we’re really saying is Belfast city centre will be full of ‘decs’ in a few years time”

“Which it basically already is!” he laughed.

Taking onboard his comments however, the city council confirmed that future millions earmarked for the scheme will be divided between ten smug CEO’s tasked with managing the areas.