Cancelled Ryanair flights to be flown by layabout MLAs 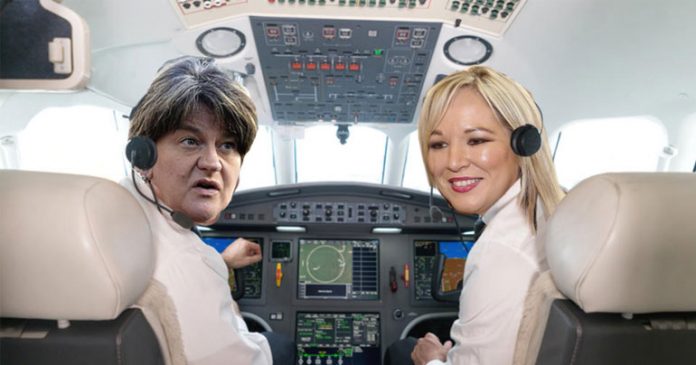 With hundreds of Ryanair flights facing cancellation over unused vacation time, Secretary of State James Brokenshire has dramatically ordered work-shy MLAs to start earning their wages and take to the skies.

“It’s an ideal solution” he told a press conference earlier. “Much like pilots, MLAs get paid for sitting on their holes all day. As they’ve been such doing an excellent job of that recently we thought we’d lean on their expertise to save these flights from cancellation!”

Trials of the scheme have proved troublesome, after the Democratic Union of Pilots, headed by Captain Arlene Foster, refused to fly anywhere that doesn’t follow a traditional route. She also ordered cabin crew to march up and down the aisle not selling alcohol.

Meanwhile, Sinn Flyin Deputy First Captain Michelle O’Neill wouldn’t allow her co-pilot to take off until she agreed that all cabin announcements would be made in Irish, resulting in a long delay on the runway. Eventually a compromise was reached, but even that left passengers bewildered.

“To be honest I wasn’t really interested in knowing what the windspeed and outside temperature were in the first place!” revealed angry passenger Andy Baggage, “However I especially couldn’t be arsed hearing it in f**king Irish, English AND Ulster Scots!”

Despite this, Ryanair boss Michael O’Leary has described the experiment as a “great success”.

“The MLA’s have brought all their Stormont skills to our airline,” he told The Ulster Fry. “Just like in your hospitals, the number of passengers on waiting lists has soared and we’re even able to charge kids for the wee bus journey out to the planes.”