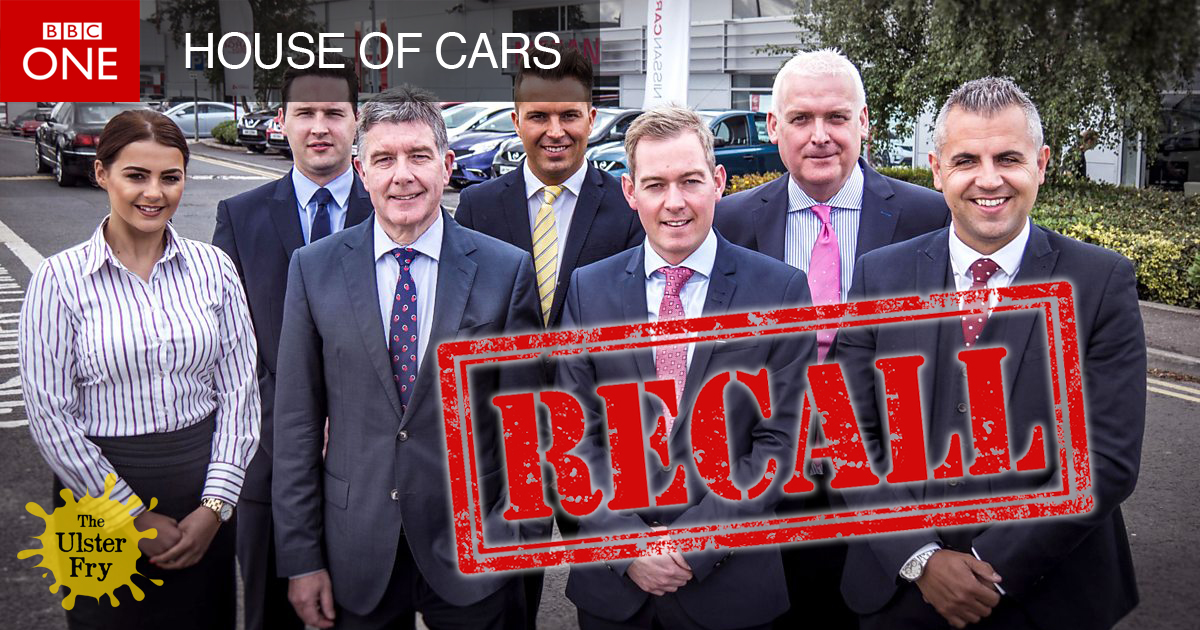 With the car industry already steeped in crisis following the Volkswagen emission scandal, Belfast car dealership Charles Hurst has poured more yet fuel on the fire by announcing they are recalling their fly-on-the-wall BBCNI documentary, House of Cars.

The move comes after a series of safety concerns were raised by the general public after test-driving the show at home.

“Jesus Christ, I nearly choked on my burrito when I seen your man Kenny’s orange tango-tan!” admitted Derry car enthusiast Al Lloyd-Wheeler. “The wife was watching as well and she gave herself whiplash getting up too quickly to turn the contrast down. We’re putting a claim in for defs!”

Several other viewers have come forward to criticise the show’s safety features. Cookstown IT manager, Qwerty Keys told us “I took it out for a spin last night when I realised I needed to stop for a pish. But the show just kept going, going and going and didn’t have any breaks! If it hadn’t been for herself changing channels to check the lotto I could have had a serious accident!”

Elsewhere women have complained that the BBC vehicle had worrying seat-belt issues. “Aye he just came in last night when it started, threw himself down down on the settee, unbuttoned his trousers and stuck his hand down his cacks!” complained Belfast housewife, Peggy Lundy. “Then again” she lamented “all the men on it do seem like dicks who need to get a grip”

Meanwhile it seems Volkswagen aren’t the only company in the car industry guilty of generating harmful emissions.

“Trust me” said disgruntled girlfriend, Rhonda Civic. “If you were forced to sit through an hour of that shite you’d be fuming too!”