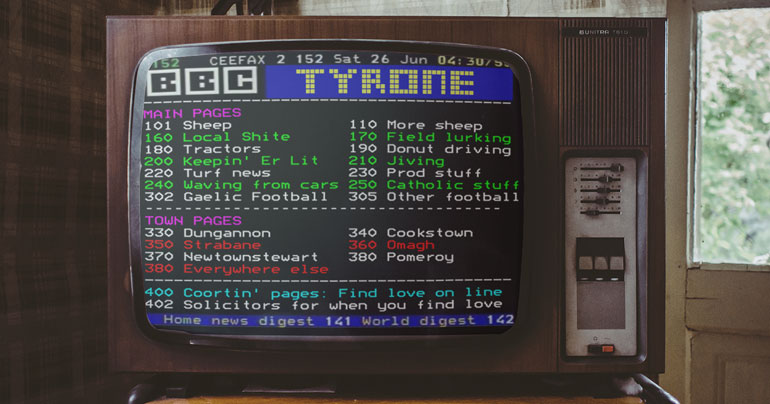 The technology sector West of the Bann is set to get a major boost as part of the negotiations between the DUP and the Conservative Party in London, which will see £150 million paid out to provide ultra-fast broadband across NI.

“Or maybe that should be ‘Ulster-Fast’,” admitted one of the DUP team.

“We’re hoping to get full Teletext services for Tyrone within the next 5 years – at first it seemed the Tories were only going to pay for the east of the county but Arlene put her foot down and said ‘the people of Castlederg deserve Ceefax,’ and yer woman May soon crumbled.”

“This is great news hi,” said Dungannon business man Billy Clogher. “A lock of years ago there was some chat about getting Superfast Fibre Optic Broadbrand in these parts, but it turned out it was just a delivery of Sunblest High Fibre Brown Bread. It didn’t improve our internet connectivity but at least it kept us regular.”

Traditionally viewed as one of the more neglected areas of Northern Ireland when it comes to technology services, this is the second big boost to services in Tyrone in recent months.

In May the EE Mobile Network announced the installation of more than 3000 “paper cups on string” communication hubs, allowing people up to 200 metres apart to communicate incoherently with each other.

“Pretty much like we do when we’re in the same room,” says Clogher.