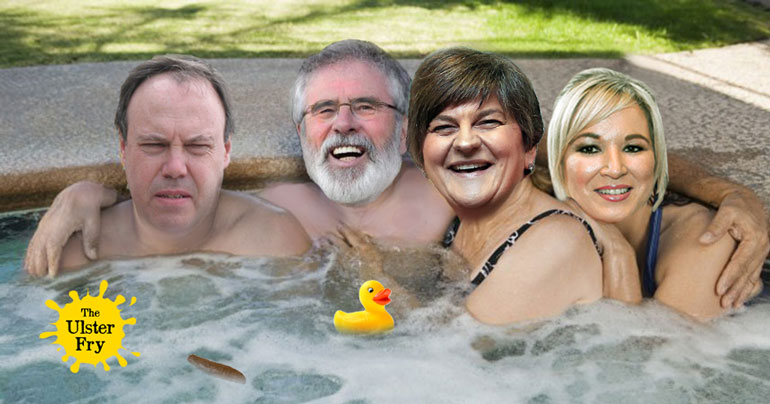 The Stormont talks are likely to last at least another 24 hours after it emerged that Theresa May had bought the DUP a state of the art hot-tub as part of their Westminster deal.

The Ulster Fry understands that the facility has been installed in a new beer garden to the rear of Parliament Buildings, alongside a bouncy castle. “That’s for the younger MLAs,” a senior civil servant revealed, “and Gavin Robinson.”

“It’s class,” we were told by Sinn Fein President Gerry Adams. “Me and Arlene have been in there all morning. My ballsack has more wrinkles than a forged electoral ID in Foyle, but I’m for staying in as long as possible.”

Mrs Foster explained that the purchase of the hot-tub was actually a serious attempt to get the talks process moving.

“We’re not just sitting up up here taking the pish, that would be unhygienic for a start.” she argued, “We fully intend to work through all the issues in a thorough and methodical manner, a few glasses of champagne and a game of ‘catch the floating voter’ along the way can hardly hurt.”

Politicians in the other devolved regions are said to be furious that the Tories have given Northern Ireland such an apparently generous deal.

“This is a blatant attempt to purchase votes, we get nothing here,” said the SNP’s Angus Sourbake, after he returned home from the launch of a huge f*cking aircraft carrier in Fife.