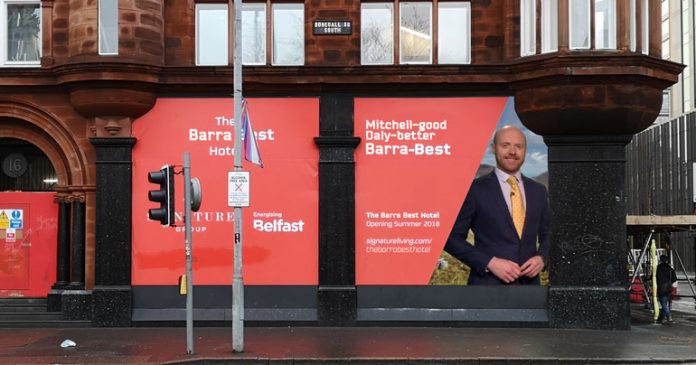 Continued delays over planning have sensationally forced the owners of the proposed George Best Hotel in Belfast City Centre to rename the flagship accommodation after local weatherman Barra Best.

The developers have been quick to put a gloss on the climb-down, announcing that the boutique hotel will become a popular destination for the meteorologist’s global fan-base.

“Our hotel will be still be packed full of Best related memorabilia,” said company spokesman Cliff Breeze. “OK, it’ll all be stuff to do with the weather instead of a global sports icon, but sure everyone loves weather, don’t they?”

“We’ve got a load of stuff already, like the pointy stick Barra used on his first bulletin and a pair of pants he wore during Season 1 of Walk the Line,” says Breeze. “My favourite has to be an old jam jar full of his beard clippings, collected from the floor of a barber shop by one of his most ardent fans.”

Other local presenters will be honoured in the development, with guests able to book into the Cecilia Daly suite and exercise in the Angie Phillips gymnasium. It is understood that there’ll even be a toilet named after that wee English fella that does the weather the odd time whose name we can’t remember.

Not to be outdone, rival hotel chain Four Seasons are partnering with Frank Mitchell, however guests won’t be told what room they’ve got when they arrive and will instead have to guess where they’re sleeping from a crap clue and a photo.