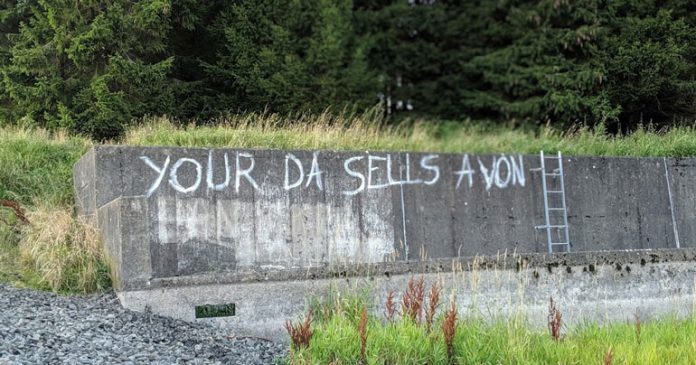 The National Union of Da Avon Sellers (NUDAS) is threatening a one day strike over what it terms as “a lack of respect for our profession in society.”

Addressing a rally of over 3000 das in Belfast’s Writer’s Square, NUDAS President Niall Polish said that the time had come to “stand up and be counted”.

“For too long now, our children have been subjected to daily rituals of abuse, purely based on our proud occupation,” he told the crowd.

“And I ask you now, what do their das do that makes them so superior?” he yelled, to cries of “Tell us! Tell us!” from the assembled throng.

“I’ll tell you what they do… They’re Baristas and Moustache Groomers, Bouncy Castle Operators and Tattooists, that’s what they do.”

“But no one shouts at their kids – ‘Your da sells cappuccinos’, or ‘your da draws flowers on women’s arses’ – do they?”

Mr Polish then urged his membership to back his call for a national day of inaction.

“The only language they understand is the language of not calling round to pick up a catalogue,” he argued. “We must ensure that every home in this country is devoid of the opportunity to buy Avon products for at least one day. Then, perhaps, people will sit up and take notice.

Following the rally, NUDAS members voted overwhelmingly to not bother their holes calling round to pick up orders “at a time of their own choosing.”

In a move which threatens to break the local economy, the Ulster Fry understands that the Union of Kleeneze Catalogue Leavers has also said it will stick a load of catalogues through people’s doors then not bother to collect them as part of a sympathy action.