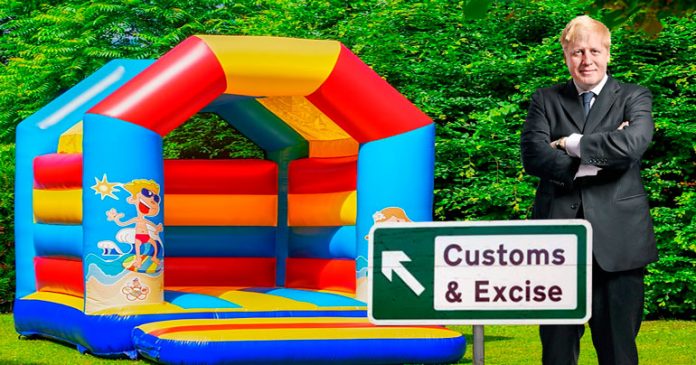 Boris Johnson is set to unveil audacious plans for a string of inflatable customs posts along the Northern Irish border.

In an exclusive interview with The Ulster Fry the Prime Minister revealed what he called  the ‘ultimate Soft Border solution’.

“Look, it’s perfectly clear that no one wants to see permanent infrastructure in border towns like Ballythingummy and Londonderby,” he told our reporter. “Inflatable customs posts can be moved anywhere, even floated out to sea if we decide to do our checks there.”

“Kids will love it, they’ll all be asking their parents to take them on a day out to the customs check at Toome, or wherever your border is.”

Our reporter then suggested that the bouncy border crossings could become targets for dissident Republicans, who’d only need pointy sticks to deflate his entire plan, but Mr Johnson was having none of it.

“That’s just the kind of defeatist piffle-paffle that the EU wants to hear,” he exclaimed. “Everyone loves a bouncy castle, the only downside is that you’ll have to take your shoes to cross the border.”

“When Odysseus faced the Minotaur at the Battle of Thermopylae, he wasn’t put off by a few minor problems like this, it’s utter tosh,” he concluded, as he groped our reporter’s leg.

The EU has confirmed that it will take five minutes or so to pretend to examine Mr Johnson’s new proposals before rejecting them.

“To be fair, they’re no more mental or confusing than anything else he’s come up with so far,” said a spokesman