NI paramilitaries to hold recruitment fair ahead of Brexit 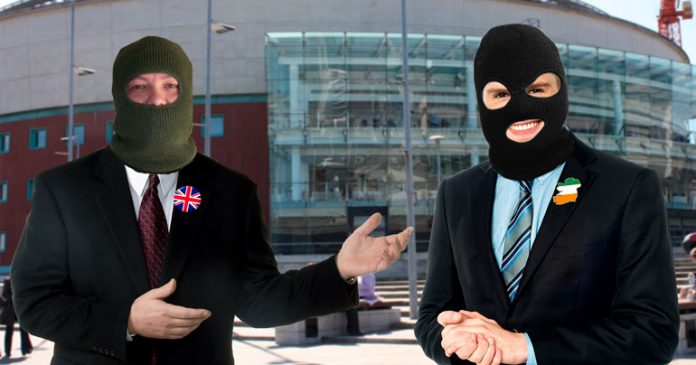 Paramilitary organisations from across Northern Ireland’s political divide have joined forces to organise a recruitment fair aimed at attracting new members to deal with an anticipated upsurge in activity after Brexit.

“Brexit offers favourable trading conditions across the paramilitary sector,” explains Euan Maghaberry from the Continuity IRA. “We’re looking for new staff for many job roles – such as rioters, bomb makers and anti-social workers.”

“Basically we need unenthusiastic, demotivated individuals who are willing to start at the bottom and work down.”

His UDA counterpart Noah Pope told us that his organisation intended to expand its operations over the coming months. “These are uncertain times, and we need to be able to take full advantage of that uncertainty.”

“We have to be ready to seize any opportunity that comes along, then drive that opportunity to an abandoned industrial estate and set fire to it.”

Prospective candidates can expect a rigorous selection process, but Pope says that shouldn’t put applicants off.

“Ideally we’re looking for people with at least 5 GCSEs at grade C or below, but there’s no need to fill out an application form or submit a CV. In fact you don’t even need to be able to spell CV, so long as you know one end of a baseball bat from the other.”

Hundreds of school leavers, eager to build a career in the illegal profession, are expected to turn up to the fair in the Waterfront Hall on 31 October, with Prime Minister Boris Johnson due to address the applicants.

“I’m delighted to be involved in such a groundbreaking event,” he told us. “It’s absolutely spiffing to see these hard-nosed businessmen leap on board the Brexit bus and offer young people the chance to build a more dysfunctional future.”