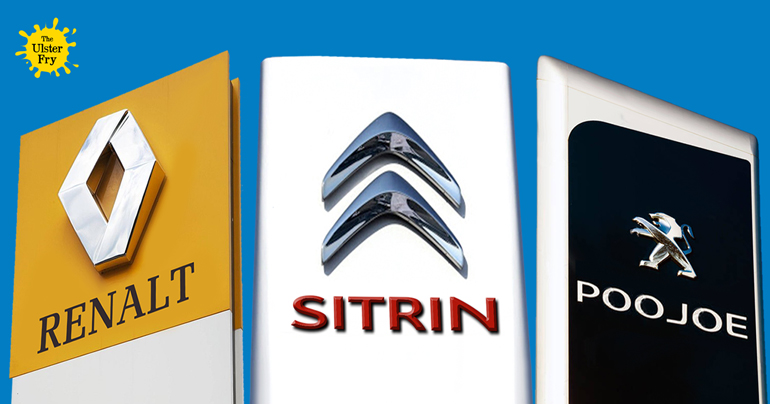 French car companies have finally woken up to the fact that many people here struggle to pronounce their names, and are to undergo complete rebrands to suit the Northern Irish consumer.

According to Parisian motoring journalist Sylvestre Lecat, the change was inevitable.

“May wee,” he told us, “vous est totally unable to say les French woords, we have been knowing of this pour years. By changing of the names the cars de la France weel get un grande sales boost.”

The Northern Ireland Culchie Federation, an “umberella” group for rural dwellers here, has welcomed the move.

“100% hi, 100%,” said NICF spokesman Matty Ferguson, “Sure fur now when we chat about the Renalt S-Pace, the Poojoe Wan-Oh-Sax and the Sitrin Extra Pickassa, folk will know what we’re bletherin’ about, so they will, hi, so they will.”

Other motor manufacturers are believed to be considering similar moves, with plans underway for the launch of the Voltswagan, Hayundee and Fate brands later this year.

However Spanish car giants SEAT have said they can’t be arsed changing the spelling and are just going to pronounce their name seat like everyone else.