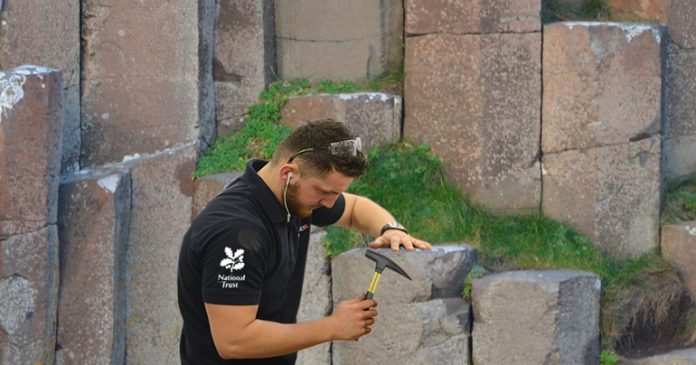 The National Trust has laid centuries of conjecture to rest by announcing that they built the Giant’s Causeway, and that anyone who fancies a dander round it should pay handsomely for the privilege.

“People used to think that a giant built it, or that it was formed in the great flood out of the Bible,” says Trust spokesman Brock Formation. “There were even folk who claimed it was formed by some kind of volcanic eruption, I mean, how ridiculous is that? Now we can finally set the record straight!”

“Our archaeologists have discovered that it was actually constructed by stone age National Trust volunteers to create a visitor experience for prehistoric tourists.”

“We’ve uncovered evidence of an primitive car-park close to the Causeway itself,” he revealed. “There’s even a rudimentary toilet facility with urinals labelled “Ye Olde Armitage Shanks” and bog roll made of slabs of slate.”

Most convincingly of all, a prehistoric gift shop has also been found. “It sold all kind of ancient tourist tat,” we were told. “Wooden clubs decorated with the National Trust symbol, souvenir stationary like spear sharpeners and stone tablet notepads, even a T-shirt that says ‘My ancestors went to the Giant’s Causeway and all I got was this lousy mammoth skin’.”

As a result of the discovery, the attraction will now be renamed “The Giant’s Car-Park”, but anyone wishing to visit is advised to arrange a substantial bank-loan in advance as ticket prices are likely to rise.

“It’s costs a fortune keeping half the Causeway closed,” explains Formation, “and we need to preserve the National Trust for future generations.”