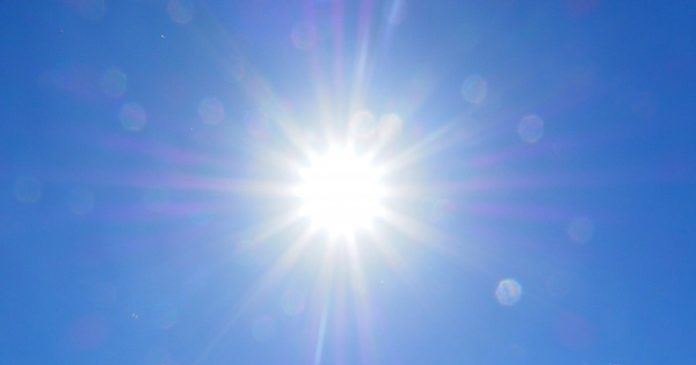 People across Northern Ireland have reacted with “fear and awe” after a strange yellow object appeared in the sky above the province.

The unexplained phenomenon brought thousands of bewildered people staggering out of homes and workplaces, blinking uncontrollably, in scenes described by one eye-witness as “like something out of the Bible, except not one of the boring bits.”

“This has been a semi-religious experience for many,” says the BBC’s science correspondent Bronson Burner. “We’re seeing queues outside places of worship, like churches, gospel halls, pubs and off-licenses, and we’re hearing that people in Craigavon have been daubing crude paintings of the mystery object on the walls of their houses.”

In Tyrone, local farmers have taken a break from spraying shite to arrange stones into circles in their fields. “We’re not sure why,” says Burner, “but there’s probably a grant in it somewhere.”

In Larne, meanwhile, there are reports of people dancing naked round bonfires, although this has been described by experts as “completely normal behaviour for Larne.”

Scientists have admitted they are “absolutely baffled” by the sudden appearance of the strange yellow light.

“I think the phenomenon was covered in one of my old text books at Queens,” revealed Northern Ireland’s top scientist, Barra Best. “I always thought it was a myth or an auld fairytale, but I’ll bung a rake of stickers of it all over my weather map tonight anyway.”

The government has urged to remain calm.

“Please remain calm,” said Theresa May. “Chances are it’ll be away in a lock of days, and you won’t see anything like it for months.”