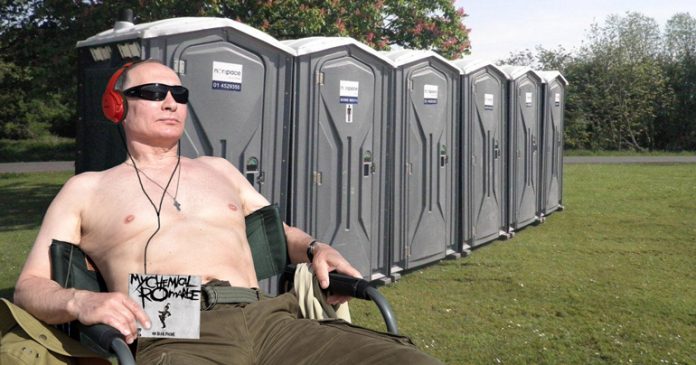 Russian leader Vladimir Putin has ridiculed claims that he blocked a chemical toilet while staying in a static caravan during a recent UN summit.

“This is a western conspiracy aimed at discrediting our government,” he told reporters. “In my country we only have extremely modern flush toilet facilities, and I went before I got on the plane.”

Mr Putin went on to deny knowledge of any form of chemistry whatsoever, including the Periodic Table of the Elements, American rock band My Chemical Romance and English electronic pop duo The Chemical Brothers.

“In Russia, we have none of those things, they are all figments of your decedent Western imaginations, especially so-called Chemical Weapons.”

US President Donald Trump countered these claims by producing what he described as “a dossier of evidence which proves that Mr Putin is lying.

“FAKE NEWS!” he tweeted. “If you turn to the toy section of the Argos catalogue, you will find Chemistry sets clearly marked for sale.”

“These sets could easily find their way onto OUR streets, if there was a branch of Argos in America.”

As a result of this argument lots of people are likely to die.