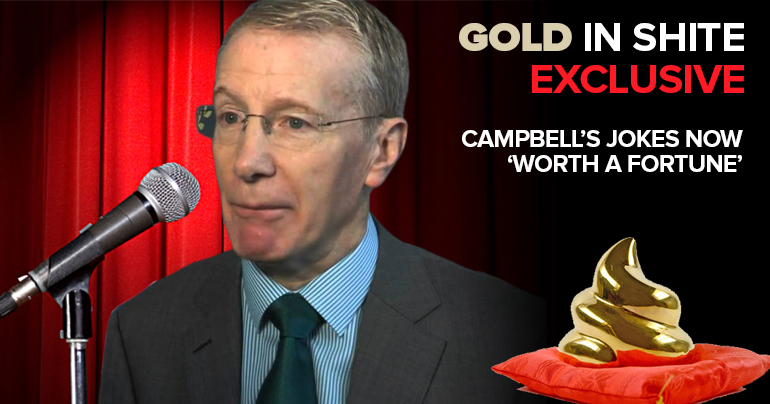 The world’s economy has been thrown into chaos this week, after news emerged that human excrement could now be mined for precious metals, including gold, silver and platinum.

Scientists in Denver shocked the world on Monday, when they claimed that every 1kg of pure shite contained small amounts of precious materials including gold and silver. Although the boffins have yet to study Gregory’s vault of hilarious quips and comedy material, DUP experts believe the Londonderry MLA could be sitting on a pile of shite worth up to £2.7m.

The new toilet-based discovery is set to revolutionise the worldwide economy, as business leaders famous for not taking any shite, are now set to take as much of it as they possibly can, in a shocking change of tact. It is already understood that paid-entry public toilets are being re-designed to maximize profits, so that the price of admission to take a shite, is a shite.

The discovery also affects other areas of society, including language used in everyday conversation. The term ‘that’s not worth shit’ is now set to be replaced with ‘that’s probably worth some Argos Jewellery’, whilst it’s nonchalant counterpart ‘I couldn’t give two shits’ is due to be substituted with the more factually accurate phase, ‘I wouldn’t give ye a sovereign ring’.