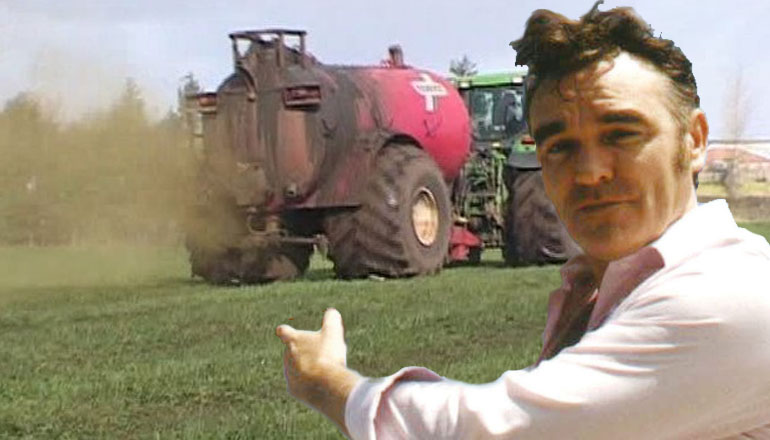 Morrissey flew into Belfast this evening and found himself in the middle of yet another controversy, after the Ulster Farmers Union announced plans for a protest at his Odyssey Arena concert.

The former Smiths frontman is perhaps as famous for his strident support of vegetarianism as he is for his lyrics, going so far as to ban the sale of meat products at his gigs, so it should come as no surprise that Northern Irish farmers aren’t his biggest fans.

“We’ll bring folk from all over the country,” said UFU spokesman Brian Pork, “thon boy needn’t think he can come over here with his fancy vegetarian ways and lecture us that Meat is Murder, or whatever auld shite he’s planning. And shite is what he’ll get, for we’ve a load of tractors coming in to surround the place and we’ll spray him with pig slurry if he comes anywhere near.”

Fortunately the crisis was averted after a late change of heart from the singer. “I read the farmer’s statement,” Morrissey told us, “gave it a bit of thought, and then ate one of your pastie baps. It was f**king class.”

“I can’t believe I’ve been living off shite like quorn and cabbages all these years, when there’s stuff like sausage rolls, bacon baps and pork scratchings out there. Any wonder I’ve been such a miserable bastard. From now on the only veggies I’ll be eating will be veggie roll, maybe with a side order of leek in my sausages.”

The singer went on to announce that he would be making minor changes to some of his most famous songs to reflect his new attitude. “Yeah there’ll be a few changes, and I’ll even rework a few Smiths classics,” he said. “Fans can expect ‘Heaven Knows I’m Middle-Cut Now, Meat is Marvellous, Beef Farming Man and, of course, Everyday is like Ulster Fryday.”