Jobs blow for local butcher as steak day is hijacked 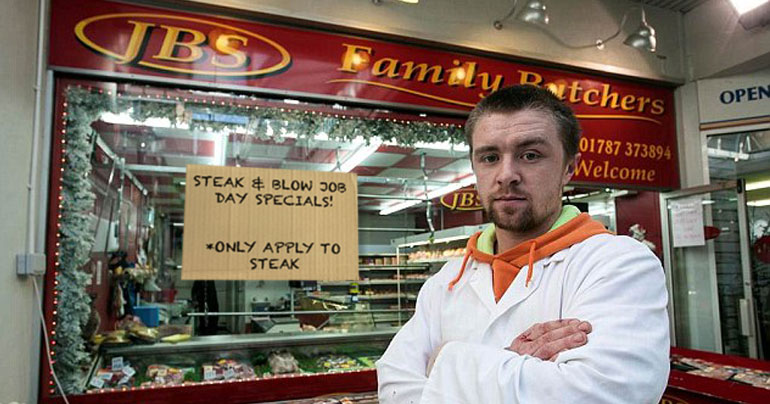 A Buckna Butcher has hit out at his shopkeeper neighbours for cashing in on what he describes as the only day of the year he can make a profit.

Buckna Sunbed shop started the trend by offering ten extra minutes to burn yourself to a cinder with their Fake and Glow Job Day offer.

The local Women’s Institute soon got in on the act early by advertising a Bake and Sew Jobs day.  Searing with rage, Mr Bacon shook his fist and shouted obscenties.  The pissed off meat muncher said the old biddies should stick to the Jam and Jerusalem and out of his territory.

Close by, the Buckna Garden Centre encouraged lady gardeners to please their husbands by joining in a Rake and Hoe Job Day, and the village fishmongers offered a Skate and Roe Job special.

Even local garage the Modern Muffler was offering a deal on Brake and Tow jobs. However the icing on the cake came when Nevin discovered that the Buckna Bakery was putting on a Cake and Dough job event, where customers could come in and taste a new range of cream pie.

Government agency Invest NI were quick to congratulate the local businesses on their clever advertising, “We’ve even decided to have a Make No Jobs day ourselves,” said a spokesman.

“No change there then,” said an angry Mr Bacon, “Anyway I’m so out of pocket I’ve even had to lay off my wee Mickey.”

“That’s my assistant,” he added hurriedly, “haven’t you had enough innuendo for one day?”