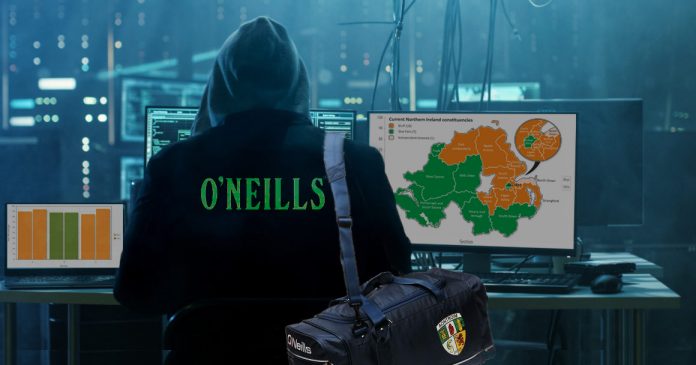 Following the revelation that global election results are being coerced by nefarious social media activity, local tech startup Jordanstown Analytica have admitted they’ve been manipulating NI voters on Facebook too.

“Our practices aren’t as sophisticated as them Cambridge smartholes,” admitted Jordanstown Analytica CEO, Shay Enlike. “They do fancy techie stuff like ‘data mining’, ‘web scraping’ and ‘keyword analysis’….. but we haven’t a baldiest what any of that shite means…”

The scandalous admission was captured during an Ulster Fry undercover operation in the bogs in Lavery’s, which Billy started with the intention of secretly videoing Seamus boking his ring up. However a loose-lipped Mr Enlike was slabbering about his work at the nearby urinals.

“We just set up pages called things like ‘True Loyalists Will Never Surrender To Dirty Irish Bastards’ and ‘Republicans For a 32 County Ireland, Free State Tayto & No Brits’…. and that sort of thing,” he was overheard boasting to the guy in the next stall.

“We don’t even have to program thon A.I. bots or pay Russian hookers….. I mean….. hackers,” he slurred. “We just get the ball rolling by writing a couple of sectarian posts and then the public jumps in and does the rest for free!”

“We’ve won Sinn Fein and the DUP tens of thousands of votes” he added finally whilst shaking his willy.

However, business experts have pointed out that the startup faces a bleak future as the Belfast Telegraph already offers the service for free.