Celebrities call for ban on “cruel” trade in Leprechauns hats. 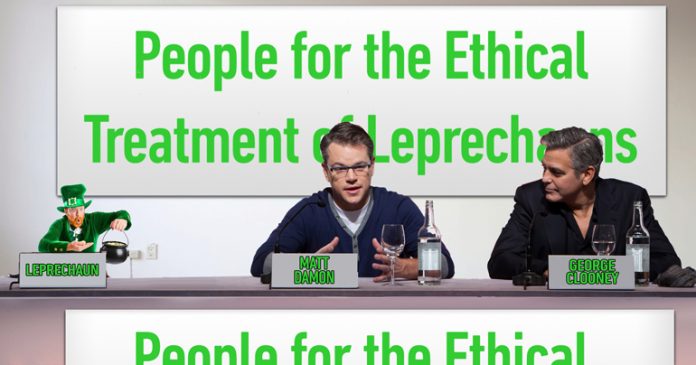 Top celebrities including George Clooney, Matt Damon and Susan Sarandon have come together to campaign against the illegal trade in Leprechaun hats and other paraphernalia.

Speaking at the launch of People for the Ethical Treatment of Leprechauns (PETL) Mr Clooney condemned “the annual slaughter of little people for their equivalent of fur.”

“Leprechauns are now on the verge of extinction,” he told reporters. “Every year it’s the same…. Unscrupulous poachers hunting them all across Ireland, not for sport, not for food, but purely for their distinctive green headgear.”

“There were once millions of these magnificent creatures on this island, skipping about the glens and hiding crocks of gold under rainbows. Now we are down to the last few hundred, with many forced to hide out in disused buildings, like Stormont.”

Local Leprechaun Jinty McGinty also attended the press launch. “I’d like to say ‘tap o’ the marnin’ to you, but in truth, this is another shite marnin’ for my kind. St Patrick’s Day was once a cause of celebration for us all, but now we live in fear of being trapped and scalped so that our hats can be sold to drunk people in pubs at inflated prices.”

The World Wildlife Fund has confirmed that it is placing Leprechauns on the endangered species list.

“If we’re not careful we could see them go the same way as the Orange Collared Snake, a proud creature that once roamed the Himalayan mountains, only to be hunted to extinction to provide sashes for the Twelfth,” said Sir David Attenborough.